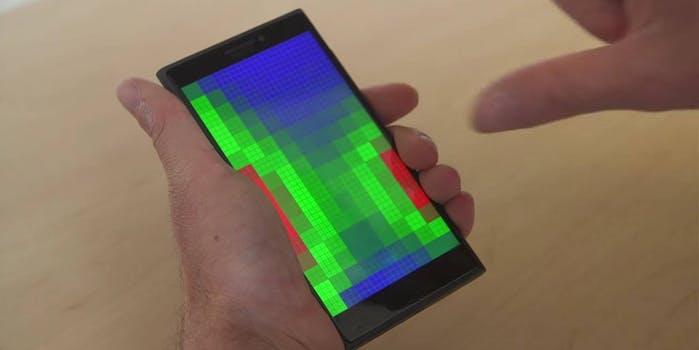 Microsoft's experimental new pre-touch screen knows what you want to press before you even touch the screen.

If our old vision of the future included touch screens, does the new future include touch-less screens? Microsoft seems to think so, imagining a world where you no longer have to swipe your greasy fingerprints off your phone every day. They call it a pre-cognitive touchscreen and it’s incredible.

In a new video from Microsoft Research, you’ll get an idea of what a touch-less future would look like. The screen senses how close your fingers are and brings up an app’s controls whenever you get near. Developers can localize controls based on your hand placement, for example, allowing a video or photography app to pull up the shutter button on the right or left side of your phone based on which hand you’re using. It can tell where you’re going to press based on how you’re holding your phone.

Ken Hinckley, a Principal Researcher for Microsoft who lead the project, said of pre-touch “I think it has huge potential for the future of mobile interaction. And I say this as one of the very first people to explore the possibilities of sensors on mobile phones, including the now ubiquitous capability to sense and auto-rotate the screen orientation.”

There’s no word on when this technology will hit the market, but it has fascinating implications for everything from interface to security. Imagine swipe gestures to unlock your phone based on how far away your hand is or a shared family device that comes ready to adjust itself for right and left handed users out of the box. We look forward to seeing more from Microsoft about this project. In the meantime, watch this video and marvel at the future.