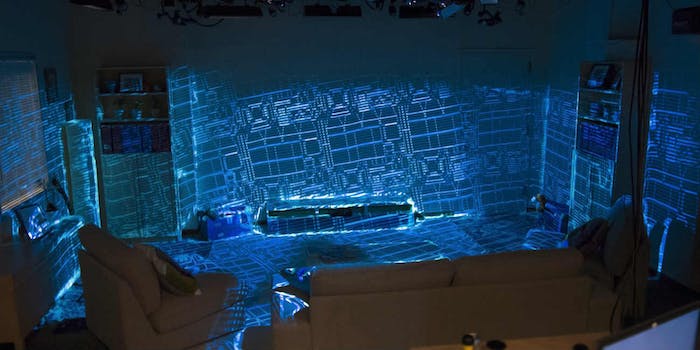 Microsoft’s ‘RoomAlive’ transforms any room into a giant Xbox game.

You, too, can have a two-dimensional virtual reality-ish gaming experience in your living room, if you can spare $2,000.

RoomAlive is an evolution of Microsoft’s IllumiRoom research project. RoomAlive projects images on the floor and walls of an entire room to create an augmented-reality gaming experience.

The technology works via six pairings of a Kinect motion sensing camera and a video projector, which Microsoft refers to as a “procam unit.” The six procam units combine to make the projected images interactive. You could pretend to hit a creature on the wall, or shoot it with a fake laser gun, for example.

This is just a proof-of-concept tech demo, so Microsoft isn’t talking consumer versions of the tech, and therefore wouldn’t talk about price, of course. But just for fun, we can figure out what a DIY version of RoomAlive would cost you.

An original Kinect camera for the Xbox 360 costs $100. You’d probably want to use the improved Xbox One Kinect camera instead, which costs $150, but let’s say you’re trying to keep costs down.

The RoomAlive demo uses a projector manufactured by Benq. The list price of the cheapest Benq projector we can find on Amazon is $430, but let’s say you can get the current, sale price of $270 for each unit.

Your DIY RoomAlive setup, with six homemade procam units, will cost you $2,220, minus sales tax. That makes the Oculus VR rig, at a current price of $350, downright cheap by comparison!