Can Microsoft’s facial-recognition tool guess how old you are?

Microsoft thinks its facial-recognition technology can guess your age and gender, and to prove it, the company set up How-Old.net to let anyone take its algorithm for a spin.

The results vary, but after testing a handful of photos taken on the same day, I can safely say that Microsoft has no idea how old I actually am.

After you type in your name, How-Old.net tries to find your picture online and offers you a handful of results to choose from, but it also lets you upload your own if you prefer. The site then uses facial-recognition application programming interfaces (APIs) to predict your age and whether you’re male or female.

The site is part of an effort to promote the Azure Machine Learning Gallery, a collection of open datasets and projects that can help people experiment with machine learning in speech, facial recognition, vision, and text analytics. Engineers used the data provided by one component of the gallery, the Face API, to figure out how old people are.

Unfortunately, it’s not entirely accurate. I tried three times with three different photos and each one produced a different age suggestion. In fairness, it did get my gender right each time. 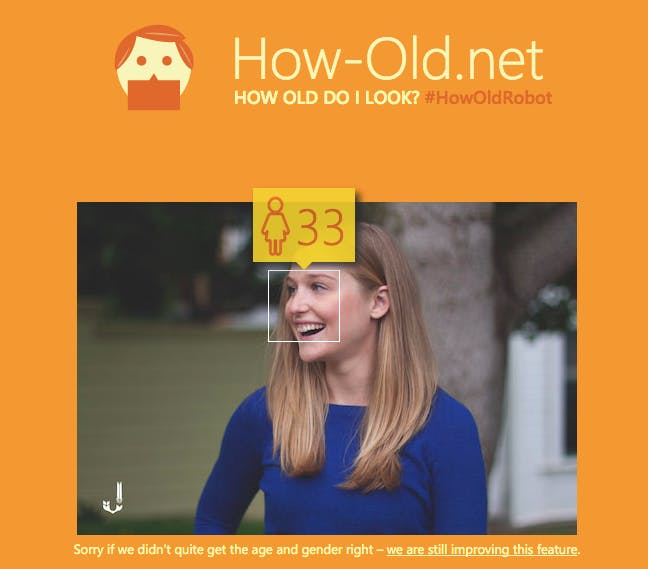 Other people are playing around with the service, too, and finding it a bit inconsistent.

Microsoft's http://t.co/DdbhKHtnEE thinks I look 23 (I'm not) but more accurate than the Mi Note, at least #Build2015 pic.twitter.com/Q7C4IW6hrb

Oh dear, might have to shave the damn beard. pic.twitter.com/qUxO4paXMx

Microsoft’s engineers say that the application was much more popular than they anticipated. When initially testing the product, engineers sent an email inviting a few hundred people to try it. Within hours, over 35,000 people had tried it, most of them using their own photos.

It’s kind of fun figuring out how old a computer thinks you are—until you realize that the software behind it is detecting intricate details of your face. It’s a reminder that technology can figure out the most intimate details of your personal features in seconds.

Or maybe it’s just a fun way to kill time with your friends.

Photo via Giuseppe Milo/Flickr (CC BY 2.0)