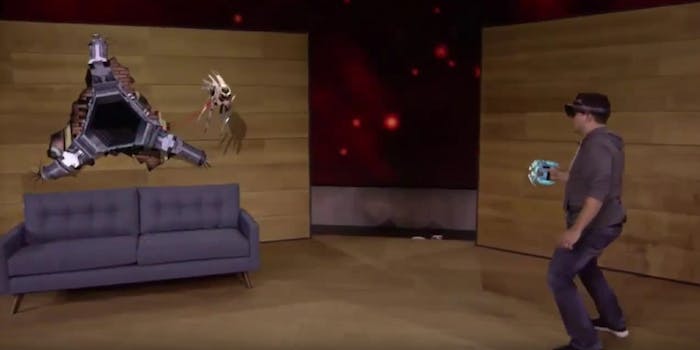 Microsoft HoloLens might be the future of video gaming

It's impossible to watch this demo and not want to play with HoloLens right now.

Microsoft showed off a futuristic gaming experience at an event in New York on Tuesday, previewing the ways its HoloLens technology could change video games as we know them.

One of the HoloLens demos was a game called Project XRay, which Microsoft called a “mixed-reality” experience in reference to the holographic component.

In an out-of-this-world demonstration, a man wearing a HoloLens put put a holographic band over his hand and wrist that turned into a cannon. It looked something like Samus’ arm cannon from Metroid Prime. The demo also showed off robots breaking through the wall, forcing the player to dip and dodge blasts while shooting back.

The experience brought to mind Nintendo‘s Wii demo at E3 2005—except this time, the visuals were far more arresting. The action was almost real.

Microsoft also announced that HoloLens developer kits will launch in the first quarter of 2016 for a steep $3,000. We’re excited to see what developers do with the technology.