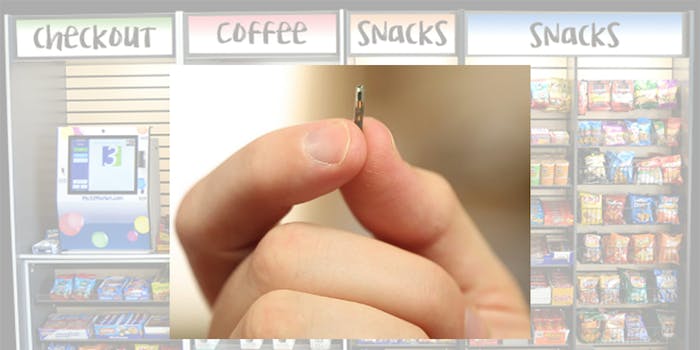 U.S. company to implant microchips in employees to improve productivity

Around 50 employees are scheduled to be microchipped on Aug. 1.

A vending kiosk company in Wisconsin plans to implant more than 50 of its employees with microchips so they can more easily open doors, buy snacks, log in to computers, and use office equipment. The bizarre experiment conducted by Three Square Market (32M) will make it the first U.S. business to implant chips in its workers.

“Eventually, this technology will become standardized allowing you to use this as your passport, public transit, all purchasing opportunities, etc.,” 32M CEO Todd Westby said in a company press release.

Each participating employee will have the RFID and NFC-based chips implanted between their thumb and forefinger. The devices are no larger than a grain of rice and are capable of storing and recognizing small amounts of digital information. Similar products are found in transit cards, pet trackers, and even some passports. NFC is also found in smartphones and most commonly used to purchase items at stores or vending machines.

Three Square Market explained to ABC affiliate KSTP how someone can use their chip to buy snacks from its kiosks, or “micro markets.”

“We’ll come up, scan the item,” Westby said. “We’ll hit pay with a credit card, and it’s asking to swipe my proximity payment now. I’ll hold my hand up, just like my cell phone, and it’ll pay for my product.”

It’s important to point out that no one is required to get the implant, and the company claims there is no GPS tracking inside. Three Square Market will pay for each of the tiny $300 devices and will start chipping its workers at a company party on Aug. 1.