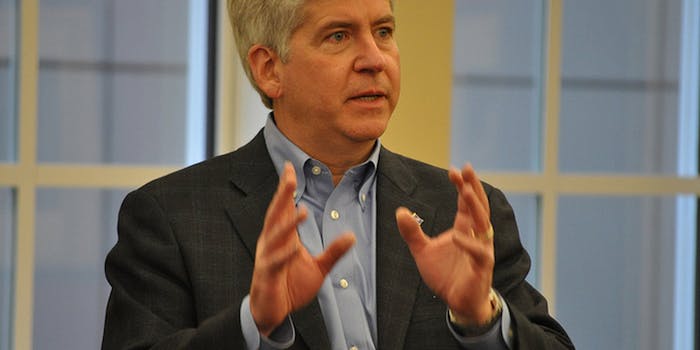 Michigan becomes the latest state to pass a new law that prohibits employers and educational institutions from demanding that workers or students give up their social media passwords.

Michigan becomes the latest state to pass a new law that prohibits employers and educational institutions from demanding that workers or students give up their social media passwords.

“Cyber security is important to the reinvention of Michigan, and protecting the private internet accounts of residents is a part of that,” Governor Snyder stated in a press release on Dec. 28. “Potential employees and students should be judged on their skills and abilities, not private online activity.”

According to the legislative language, it’s a misdemeanor crime punishable by a fine of no more than $1,000 for employers and schools to demand “certain individuals to grant access to, allow observation of, or disclose information that allows access to or observation of personal internet accounts.”

Those affected can file a civil lawsuit within 60 days of the incident via a written demand that provides “reasonable documentation of the violation.”

Michigan joins California, Maryland, and neighbor Illinois as the fourth state to enact similar type of legislation. A similar proposal was floating around in the Federal legislature, but it was eventually killed in the House of Representatives

Facebook’s Statement of Rights and Responsibilities already prohibits this practice.

Though well intentioned, it’s not entirely clear whether employers and schools forcing its workers and students to give up their social media passwords is an actual issue. There have been very few instances—just twice from what we can tell—in which individuals have been victimized by this very practice. In one such case involving a Minnesota school forcing a student to forfeit her Facebook password, a federal judge ruled against the educational institutional and declared that they had violated the constitutional rights of the student.