Did we mention he's also the former head of the NSA?

Michael Hayden, a retired Air Force general who was also the director of both the Central Intelligence Agency (CIA) and the National Security Agency (NSA), told US News & World Report that the two activities were more similar than one might think.

“The reliance on air power has all of the attraction of casual sex,” Hayden said. “It seems to offer gratification but with very little commitment.”

The comment went unnoticed after the US News story ran on Thursday, but blew up after it surfaced on the CNN program @THIS HOUR late Friday morning. 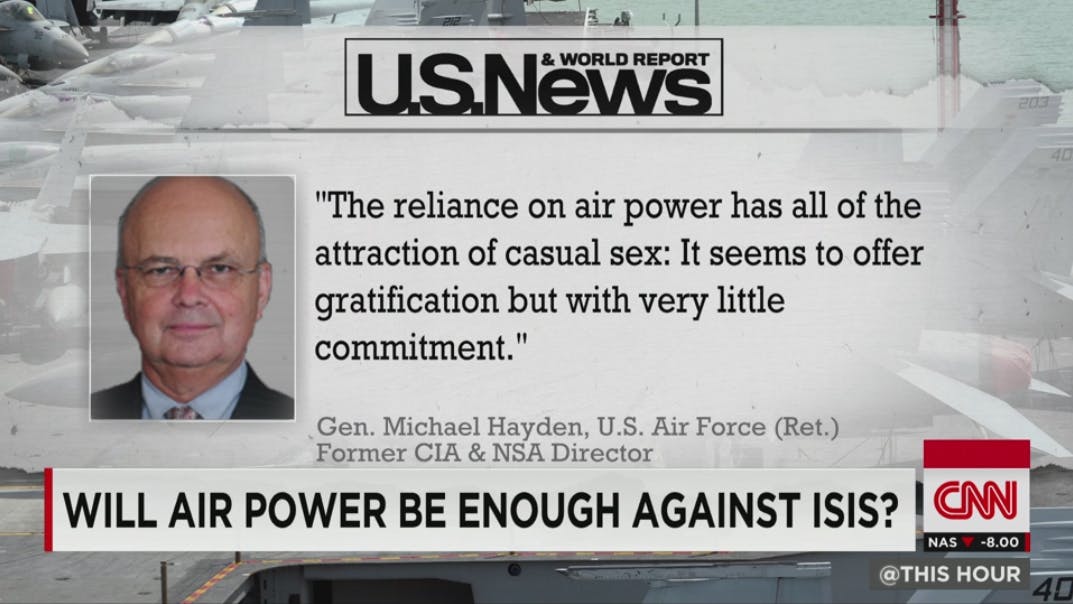 How Can We Make The Millennials Care About ISIS pic.twitter.com/ID6zMiBUqB

They’re just the tip? RT @ElaheIzadi: I think we need to talk about this. pic.twitter.com/DR0z1a4Mfh

Tinder, but for bombing the Middle East RT @ElaheIzadi: I think we need to talk about this. pic.twitter.com/9dY2xaMIgp

Jesus, what kind of sex is this guy having? pic.twitter.com/RBAaXdeQrd

“all the ladies call me ‘surgical strike'”

“Glib and clever analogy aside, does he have a point?” CNN’s Michaela Pereira asked her guest, retired Lieutenant Colonel Rick Francona.

Francona agreed with Hayden’s point, saying, “We can’t do what needs to be done strictly from the air.”