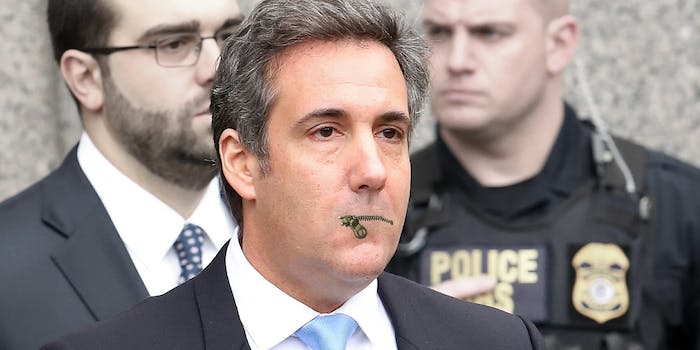 Michael Cohen plans to take the 5th—which Trump once decried

If you take Trump's word, his lawyer is guilty.

President Donald Trump once decried people who use the Fifth Amendment to refuse to testify, comments that have resurfaced in the wake of reports the president’s lawyer, Michael Cohen, would invoke his right not to testify in hearings.

In a court filing yesterday, Cohen said that on the advice of counsel he would not testify in a lawsuit filed by Stormy Daniels over his payment of $130,000 to her in the run-up to the 2016 election.

“Based on the advice of counsel, I will assert my 5th amendment rights in connection with all proceeding in this case due to the ongoing criminal investigation by the FBI and U.S. Attorney for the Southern District of New York,” Cohen said.

Almost immediately, an old Trump clip started making the rounds on Twitter, where Trump mocks people who chose to do so.

TRUMP in September 2016: "The mob takes the Fifth. If you’re innocent, why are you taking the Fifth Amendment?" pic.twitter.com/xuta4kGVuz

“The mob takes the Fifth,” Trump said. “If you’re innocent, why are you taking the Fifth Amendment?”

Interestingly, former FBI director James Comey said the way Trump operates is similar to the mob in an interview on his book tour.

Stormy Daniels lawyer, Michael Aventti, flagged a Washington Post article that found Trump himself had taken the Fifth before, during his divorce proceedings with his wife Ivana: “Trump himself invoked the Fifth Amendment in 1990, during his bitter and public divorce from his first wife, Ivana Trump. The real estate mogul took the Fifth to avoid answering questions about adultery; according to Wayne Barrett’s ‘Trump: The Greatest Show on Earth,’ the Fifth Amendment is Trump’s ‘favorite’ and allowed him to not answer a total of 97 deposition questions that were mostly about ‘other women.’”

At this moment, I think it is critically important that we remember this: https://t.co/24EV1C9QnD

Trump’s feelings on the Fifth Amendment also came up before on Twitter, where he attacked members of Fusion GPS for using the amendment to not testify about some aspects of the Christopher Steele dossier, which contains salacious allegations about the president.

Workers of firm involved with the discredited and Fake Dossier take the 5th. Who paid for it, Russia, the FBI or the Dems (or all)?

Daniels is suing Cohen for defamation after he said she lied about an affair with Trump.