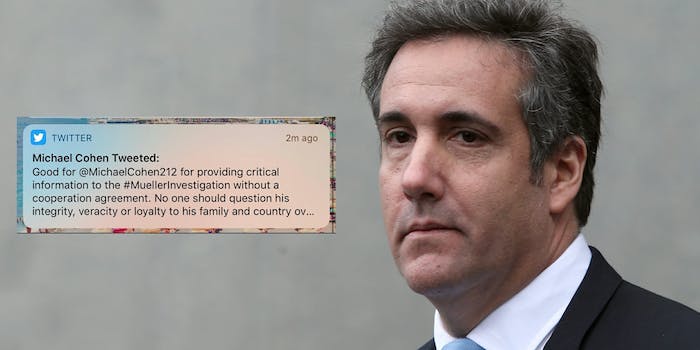 They bungled a tweet congratulating Cohen for cooperating with Robert Mueller. Could it be The Trump Curse?

Late Thursday night, Michael Cohen seemingly posted, then deleted, a self-congratulatory tweet talking about himself in the third person.

The tweet came after ABC News reported that Cohen had spoken extensively with special counsel Robert Mueller, and was deleted less than a minute after. The original read,

“Good for @michaelcohen212 in providing critical information to the #muellerinvestigation without a cooperation agreement. No one should question his honesty, veracity or loyalty to his #family and #country over @potus @realdonaldtrump,” followed by a link to the ABC News story.

Cohen’s legal counsel, Lanny Davis, then quickly explained the situation with an odd tweet of his own:

FYI – I wrote a Tweet congratulating @MichaelCohen212 and sent text to him to Tweet to his much larger following – but was delayed posting myself so he posted first. All take a breath. I don’t control or have access to Mr. Cohen’s Twitter account. He is my client and my friend.

The assertion that Davis sent Cohen the text to tweet to his followers is odd; ideally, particularly if the intention was to get the message out to Cohen’s followers, Davis would have tweeted the sentiment first, with Cohen retweeting, as happened later.

This could be a case of two adult men who just don’t know how to use Twitter. Or, according to r/The_Donald, it could be a conspiracy.

According to a post from user MadLibAdLib, the tweet was “intended to be tweeted from an anonymous account,” which could then, theoretically, be retweeted by both Cohen and Davis to bolster Cohen’s reputation.

But the fact that the two bungled the operation is, according to some redditors, due to The Trump Curse—the idea that those who go against or betray Trump are, well, cursed.

“When God is with you, no weapon formed against you can prosper,” said KS0076.

“If you were here since the beginning, you would know the other side is doomed to fail,” said OFFICIAL_CNN_REDDIT

Cohen has apparently been interviewed by Mueller on several different occasions, with each interview lasting hours. He is also cooperating with a probe with the New York state authorities regarding the activities of the Trump Organization and Trump family charity, both of which Cohen was intimately involved with. It’s unclear what information Mueller’s team has gleaned from Cohen, and how valuable it is to the investigation.