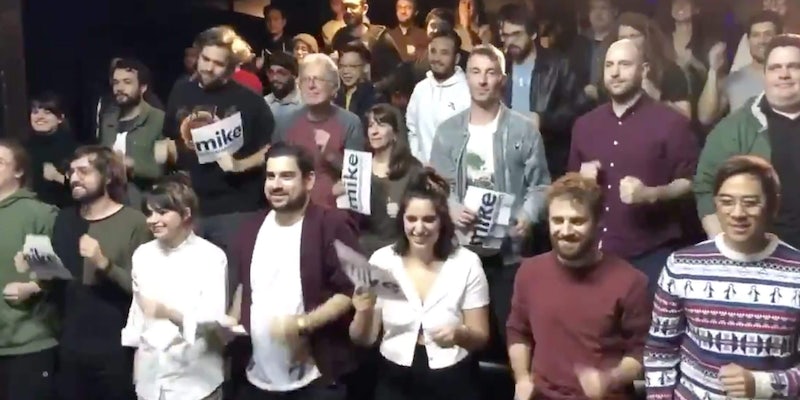 When former New York City Mayor Michael Bloomberg (rebranded recently as “Mike Bloomberg”) launched his candidacy, lots of people wondered: Who was this for? In an age of populism and anti-elite sentiment, could a billionaire technocrat develop a fan base?

The answer is definitely. People are enthusiastic for Bloomberg, people are hype for Mike.

What, you thought Mayor Pete Buttigieg was the only person to cause fans to break out the dance moves?

Look out #TeamPete because us Bloomberg Heads have our own dance! Taken at the Mike Bloomberg rally in Beverly Hills. #Bloomberg2020 #MovesLikeBloomberg pic.twitter.com/UCNo0fRZcE

Set to the tune of “Moves Like Jagger” by Maroon 5, a new video is picking up steam after it was posted by a communications intern working for Bloomberg.

Super pissed off that I have to do this show. not looking forward to it. https://t.co/MeKmgVMfdm

Even the Bloomberg campaign has gone so far as to call it not real, distancing itself from the clip on Friday morning.

Know in your heart that Michael “Mike Bloomberg” Bloomberg’s rise in the polls has come from this kind of groundswell of support from fanatics thirsty for wealthy centrists to rebalance the scales to neoliberalism, and not a one-week, $100 million ad buy that plastered his face on every television screen in America.