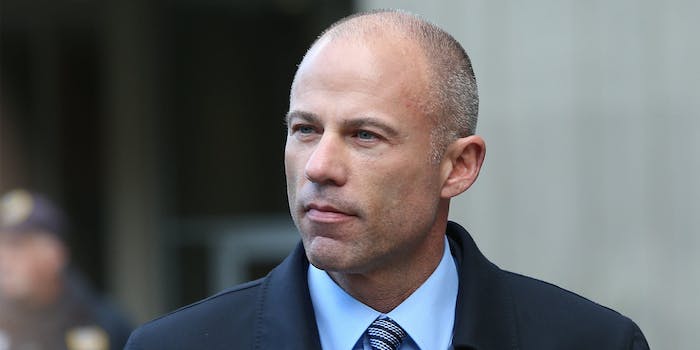 Michael Avenatti charged with trying to extort $20 million from Nike

Today in a spin of the giant wheel containing every possible sequence of known events in the multiverse, former potential 2020 Democrat and Stormy Daniels’ attorney Michael Avenatti is being charged with trying to extort $20 million from Nike.

JUST IN: Federal prosecutors announce charges against @MichaelAvenatti, alleging he tried to extort Nike, threatening to release damaging about the company, if Nike didn't agree to pay millions to him and a client.

No one saw this coming.

According to a criminal complaint obtained by CNBC, Avenatti “devised a scheme to extort a company by means of an interstate communication by threatening to damage the company’s reputation if the company did not agree to make multi-million dollar payments to Avenatti and [co-conspirator], and further agree to pay an additional $1.5 million to a client of Avenatti’s.”

Avenatti, authorities say, threatened to take $10 billion off Nike’s market cap over a phone call. He is being charged with wire and bank fraud. Prosecutors are expected to elaborate on the charges in a press conference today.

According to the complaint filed in federal court, Avenatti told Nike attorneys by phone last week if his demands were not met, "I'll go take ten billion dollars off your client's market cap … I'm not f*cking around."

Tmrw at 11 am ET, we will be holding a press conference to disclose a major high school/college basketball scandal perpetrated by @Nike that we have uncovered. This criminal conduct reaches the highest levels of Nike and involves some of the biggest names in college basketball.

Avenatti rose to prominence as a lawyer for Daniels, who took a $130,000 payment from President Donald Trump in the run-up to the 2016 election to keep quiet about a purported affair.

Avenatti used his perch as Daniels’ lawyer to increase his own fame, eventually even flirting with a bid for president in 2020 before it was derailed by accusations of both domestic violence and tax evasion.