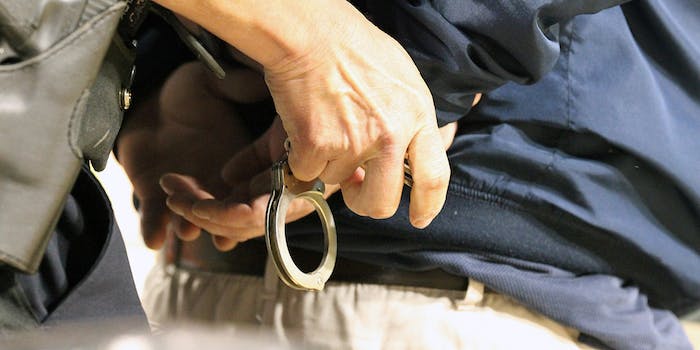 She's become the target, but there's just one problem.

A woman who helped her friend post a video of a Miami police beating became the target of a smear campaign by a police union.

The 47-second video shows a young man being arrested. After he sits in a police cruiser, the arresting officer suddenly jumps into the car and hits him.

Javier Ortiz, president of the Miami Order of the Fraternal Police, put out a press release criticizing Marilyn Smith, the woman who uploaded the video to Facebook, for posing in Facebook photos next to armed men. He included what he said were screen captures of Smith’s photos in the press release.

“Social media has placed a very negative tone on law enforcement nationwide,” Ortiz wrote. “What is extremely concerning is that the poster of this video (aka Facebook Marilyn Smith) has photographs of her with young men armed with handguns. It seems that no one cares to address this. Social media has focused so much on #blacklifematters/alllifematters campaigns, yet nobody targets the root of the problem our community faces today.”

Aside from the fact that Smith’s social media presence has nothing to do with the police behavior documented in the video, there’s another problem with focusing on Smith—she didn’t film the video. She just uploaded it for a friend who did, Shenitria Blocker.

“The cop told him he didn’t have to tell him why he was being arrested, and the officer jumped in the car, got on him and hit the man a couple of times,” Blocker told the Associated Press. “After that, another officer came up to me and told me to stop recording, that I can’t record.”

Blocker said the officer tried to knock her phone out of her hands and that her mother then hid her phone to protect the footage. Blocker gave the footage to Smith because she does not have a Facebook account.

“If the police officer has done something not within policy, it must be corrected,” Ortiz wrote. “With that said, there is a much more serious message by this video poster. Our community has accepted behavior that motivates violence in our younger generation. It’s time for the community to take a stand against this reckless behavior and stop the violence. As the saying goes: It takes a village to raise a child. Guns don’t belong in the hands of children. It is the responsibility of our stakeholders that live in our community to stop that from occurring in the first place.”

Ortiz has often used his position as a union leader to criticize the Black Lives Matter movement, according to the Miami New Times. Ortiz has defended the actions of Daniel Pantaleo and Darren Wilson, the police officers who killed Eric Garner and Michael Brown, respectively. In 2013, Ortiz was sued for beating and Tasering a music festival attendee during a dispute over a glowstick.