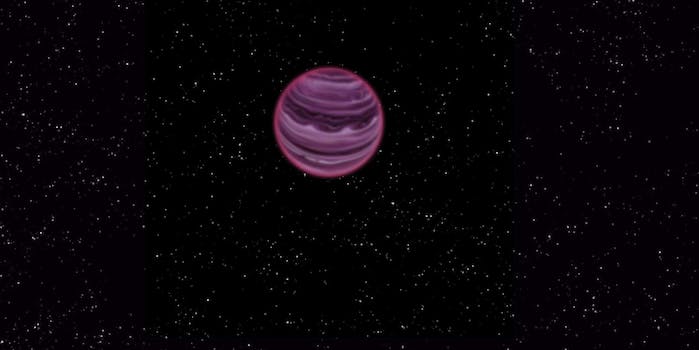 It’s young, hotheaded, obsessed with metal, and it ran away from home. In short PSO J318.5-22 is the planetary equivalent of an angry teenager.

Earth is a pretty cool place to be if you’re a heavy metal fan, but newly studied PSO J318.5-22 is absolutely the most metal planet ever discovered. Sure, our third rock from the sun gave birth to Metallica, Slayer, and Black Sabbath, but PSO J318.5-22 wins: This particular floating orb has storm clouds made of molten iron.

PSO J318.5-22 has a somewhat murky, troubled history. Found abandoned in space with no star to call home, PSO J318.5-22 is thought to have formed around a star but then somehow strayed from orbit. Flying solo, PSO J318.5-22 is actually easier for researchers to study thanks to less glare from neighboring stars, and research has led to the discovery of weather on its surface. A research paper has been published and can be viewed in the Cornell University Library Web portal.

Considered to be a newborn in terms of planetary age, the orphan planet is approximately 12 million years old.  It’s also insanely hot: Surface temperature is estimated to be somewhere in the neighborhood of 1,100 kelvin, or about 1,520 degrees Fahrenheit. Any clouds rolling over its surface would probably be made out of metal, according to Dr. Beth Biller of the University of Edinburgh. “These are likely hot silicates and iron droplet clouds,” Biller told the New Scientist. “This makes Venus look like a nice place.”

Scientists looking at the planet found that its brightness changed dramatically over short time periods. Clouds of iron droplets moving across its surface could certainly account for that shift in brightness, and it would also make for a really amazing sight if we were to ever get close enough to see the planet in detail.