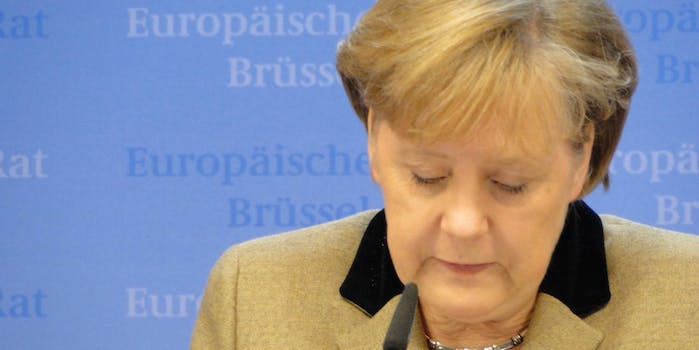 Breitbart just announced its expansion to France and Germany.

Just days after announcing that she would run for her fourth term as chancellor, Germany’s Angela Merkel expressed serious concern that fake news on social media could influence the 2017 German national election as it did the U.S. presidential elections.

In a speech Wednesday, Merkel warned against rising populism in Western democracies and the disinformation campaigns waged to “manipulate” public opinion.

“Something has changed—as globalisation has marched on, (political) debate is taking place in a completely new media environment. Opinions aren’t formed the way they were 25 years ago,” she said.

“Today we have fake sites, bots, trolls, things that regenerate themselves, reinforcing opinions with certain algorithms and we have to learn to deal with them… [we must] confront this phenomenon and if necessary, regulate it.”

German authorities and politicians have been harsh in their response to Facebook’s lax approach to the fake news problem. The justice minister Heiko Maas even wants to change the law to make social media websites legally liable for hate speech published on their platform.

This speech also comes as Breitbart News, the controversial alt-right publication that Donald Trump’s chief strategist had helped found and manage, announced its 2017 expansion into both France and Germany.

The timing couldn’t be better for Breitbart’s European launch. In France, the leader of the far-right nationalist party, Front National, is running for the country’s presidency next year while in Merkel’s own bid for chancellor in Germany will see her set against the anti-immigration Alternative for Germany party.

Breitbart’s anti-establishment content appealed to fringe right-wing political groups during the U.S. presidential election, and now its executives hope it will find new readership and impact the political balance once again.

Breitbart’s extreme content, which opposes feminism and immigration with sensationalist vigor, has been widely criticized as misogynistic and racist.

Merkel, in closing her speech, appealed to democratic politicians to “reach and inspire people” to overcome the the resurgence of fascism that threatens “the stability of our familiar order”.