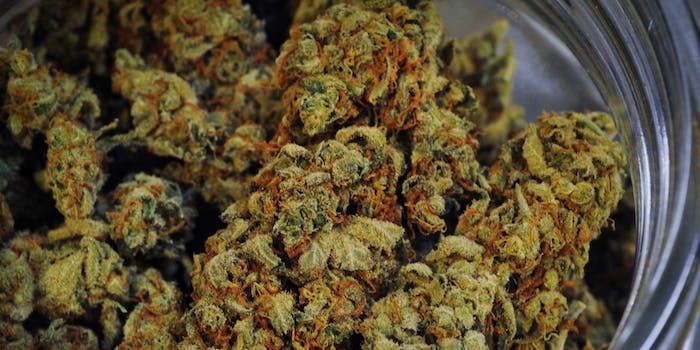 Mother who cured her Crohn's disease with medical marijuana involved in custody case with the state of Kansas.

Shona Banda has lost custody of her 11-year-old son after authorities found more than one pound of marijuana and two ounces of cannabis oil in her Garden City, Kan., home.

On March 24, Banda’s son vocally disagreed with anti-pot information provided in his school’s drug education class. Authorities questioned the boy and learned he lived in a house with adults who were proponents of medical marijuana use. His mother has Crohn’s disease and happens to be a motivational speaker spreading the gospel of the medicinal uses of Mary Jane. She’s even authored a book about using cannabis oil to cure her condition, Live Free or Die: Reclaim your Life . . . Reclaim your Country!

Banda and her son had recently moved to Kansas from Colorado, where both medical and recreational marijuana are legal. In Kansas, however, neither are.

After authorities at Banda’s son’s school got hip to the hippies living among them, child services took the kid into custody. Cops were waiting on Banda’s front step when she arrived home to prevent her from entering her own residence while they obtained a warrant to search the premises based on the 11-year-old’s pro-pot rhetoric, according to the Washington Post.

“My son says different things like my ‘Mom calls it cannabis and not marijuana.’ He let them know how educated he was on the facts,” Banda said in an interview with BenSwann.com.

“We asked for consent to search to go in and just to make sure it was a safe environment and make sure there was nothing illegal, she denied that consent,” GCPD Captain Randy Ralston told KSN.

“I didn’t believe you could get a warrant off of something a child says in school,” Banda said.

But indeed, police obtained a warrant and found the pot and paraphernalia they were looking for.

No arrests were made but Banda’s son was held in Department of Children and Families protective custody. Banda is not ashamed of her use of medical marijuana to treat her chronic condition.

“Cannabis is the most non-toxic substance on the planet, my home was much more dangerous with pharmaceuticals prescribed to me from doctors,” Banda said. “I feel like I’ve been able to be a better mother now, and I have a better quality of life. I shouldn’t have my child taken away because I can actually do things with him now, it’s wrong,” she added.

Banda’s son was turned over to the boy’s father, who returned him to the divorced Garden City mother—but he was taken into state custody again nearly a month after the initial incident occurred. Banda did not get custody of her son back following a hearing in Finney County District Court on Monday.

”The most important thing here is the child’s well-being,” Ralston said. “That is why it is a priority for us, just because of the danger to the child.”

The Kansas Department of Children and Families declined to comment, citing confidentiality, but spokeswoman Theresa Freed, told the Associated Press the agency’s goal is to “keep families together when it is safe to do so.”

According to the AP, a department news release announced that the district attorney’s office is coming to a decision about how to charge Banda. Possible criminal charges include possession of marijuana with intent to distribute, possession of drug paraphernalia, and child endangerment.

More than 50 people turned out at a rally to show their support for Shona, according to Vice.

Banda addressed the small gathering outside the courthouse Monday. An ironic or oddly appropriate day for proceedings about pot, as enthusiasts associate the number 420 with marijuana. Thanks to old police codes popularizing the digits, pot proponents typically observe an unofficial holiday to celebrate their culture on this coinciding date. Banda encouraged supporters to stand up for their civil liberties, including “freedom of speech, what you can teach your children, and what you can do with your own body.”

While the turnout in her hometown may have been modest, support for Banda and her cause was swift and overwhelming online. A GoFundMe campaign has already raised nearly $30,000 toward Banda’s legal expenses. And Twitter users appear united.

One person called her a hero.

~Shona Banda is a true Hero!!! She says do not be afraid or ashamed to save your own life. Tell your children the… http://t.co/5EhOpv3nwd

Another shared a video where the Whoopi Goldberg, Rosie Perez, and the ladies from ABC’s The View discuss Banda’s custody case.

MAKE IT VIRAL PEOPLE…Main Stream Media THE VIEW is agreeing with us…..Help Shona Banda get her son Back …http://t.co/9ZvITt8hKt

Perez talked about her own experience in Child Protective Services and called out the U.S. Government’s hypocrisy regarding the medicinal uses of marijuana as they hold a relevant patent on the plant for this purpose.

Chris Lindsey, legislative analyst for the Marijuana Policy Project, told Vice this is a “great example of what happens when there is no broader federal law governing medical marijuana use.”

News of Banda’s custody case comes just one day after President Obama hinted his support for the Carers Act, a Senate bill supported by Rand Paul that would federally legalize medical marijuana.