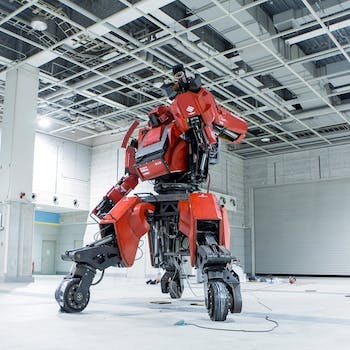 A real-life mech suit exists, and it only costs $1 million

Money burning a hole in your pocket?

I’ve got a $1 million Amazon gift card left over from the holidays, so I’m going to buy this Japanese mech suit that I can either hop inside or control from afar.

If I can’t conquer a small town, I’m leaving a bad review. Drones are kind of old news.

If you’ve got cyberpunk dreams, Suidobashi Heavy Industry has your new reality on sale now for a mere ￥120,000,000 on Amazon.co.jp, Geek.com reports. If you think that’s a steep price, you’ll have to pay extra for these “unruly” weapons: the LOHAS Launcher (a water-bottle cannon) and the twin Gatling gun (a BB machine gun firing 6,000 bullets per minute).

If this isn’t already the most Japanese product of all time, the pilot doesn’t fire the BB gun by pulling a trigger. Instead, a smile unleashes hell. “The smile shot” promises “to take out all enemies with a single smile.”

“Be careful not to cause a shooting spree by smiling too much,” the instructional video helpfully adds.

Weighing in at five tons, measuring 13-feet high, and racing by at a leisurely five miles per hour at top speed, this item is for the buyer who desperately wants to say, “I have a million-dollar BB gun.”