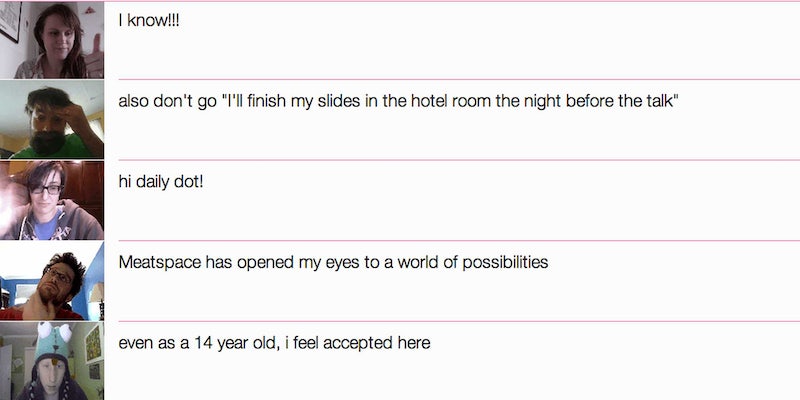 It’s like if Snapchat,Twitter, and Chatroulette had a non-creepy baby.

We have more ways to talk to people than ever. Messaging apps like Snapchat and Whatsapp exploded in popularity in 2013 as social networks like Facebook, Twitter, and Instagram grew even more mainstream. Instagram and Twitter both focused on making private messages a more vital part of their services because people just straight up love talking to each other on the Internet.

When it comes to talking to strangers, though, there was less innovation last year. Reddit, where users conceal their identities, remains immensely popular, but it’s not primarily for real-time conversations. And Chatroulette just had too many surprise penises to hit mainstream use.

This is where Meatspace enters: it wants to fill the void of thoroughly non-creepy, camera-based stranger chats. Meatspace is a Web service and app that’s basically one big GIF-filled chat room. You write a 250 character update and send it out to the group, and Meatspace uses your camera to make a GIF of you in front of your computer as an avatar, making a goofy face or just sitting there (or, I suppose, flashing everyone, although from what I can tell such shenanigans haven’t infiltrated Meatspace yet). The preferred nomenclature of users: “bro” is a term for all genders, and has nothing to do with how many popped collars you’ve donned.

Fellow ‘bros’ GIF messages start to become conversations. These conversations aren’t recorded; there’s no Meatspace backlog, so once you miss something, you miss it. The API allows users to create apps for Meatspace, and users are already making add-ons; they were even responsible for the iOS and Android apps for Meatspace, and Meatspace creator and Mozilla engineer Jen Fong-Adwent provided API support as the head developer.

The result of the collaborative atmosphere, like being at digital brunch with intensely interesting strangers (including this NYU professor I stumbled upon) who are smarter than you. Just this morning I saw a tutorial on how to maintain a luxurious beard, and lurked on conversations between developers that I can’t even pretend to understand. There’s just one channel, so it can get busy at times, but it’s not intimidating because you don’t have to be an active participant to enjoy the experience (which Reddit listeners can appreciate). And most of the users are friendly computer science types. It’s not large enough for pervert or spam infiltration.

Meatspace is a side project from Fong-Adwent and fellow Mozilla engineer Soledad Penadés. Fong-Adwent tells me it started “as an experiment of combining realtime chat with animated GIFs.” Fong-Adwent made the chat server and interface, while Penadés added her GIF library. Users have continued to add their own GIFs, and have developed some fun programs, like Meat Bunch, which arranges users in a Brady Bunch style layout.

Meatspace only saves posts for 10 minutes before they dissipate into the Internet ether. I asked Fong-Adwent whether this ephemerality was a primary goal of the project, or whether it had sprang up as a result of other developments. Like Snapchat, it’s designed to be a temporary conversation, not an archived log of interactions. “Ephemeral social networks might seem bizarre to a majority of people right now because we’re so used to saving and logging everything. But what is the point in saving all of this data?” Fong-Adwent says. “Most of it is arguably useless noise, just like most face-to-face conversations with people. Any highlights on conversations are likely remembered by the individuals participating in the conversation and will be revisited again in a future conversation. Following that logic, why not replicate the natural conversation process in the digital realm?”

I asked some of my fellow Meat bros what they thought of Meatspace during a chat session. There was nothing but enthusiasm.

“Meatspace has opened my eyes to a world of possibilities.”

“Meatspace is mostly CS [computer science] people but there’s people from so many different areas and backgrounds and I love that.”

“I’ve just been getting advice on how to get in to speaking at technical conferences. Lots of smart people who love giving advice and lending a hand here.” 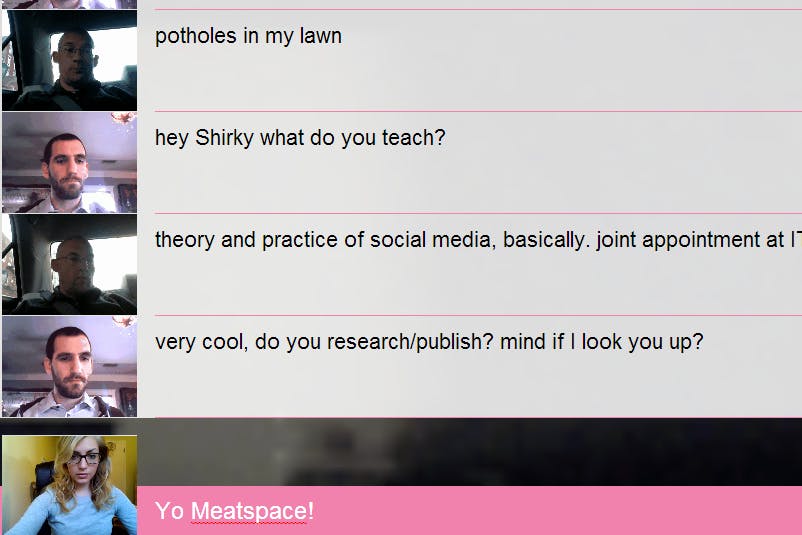 Meatspace is still a small project. Fong-Adwent says there are around 8,000 users at peak times, so it’s a teensy community, and many members are developers, engineers, or otherwise inclined to participating in open-source GIF-chatting experiments. Fong-Adwent says most people lurk, but what you’re seeing when you pull it up is the only conversation happening. And she likes it that way. “I believe that valuable relationships between human beings can only be maintained in a focused and limited number, not through a large, chaotic network of noise,” she says.

Meatspace is hosted on DigitalOcean, and it’s a streamlined service that’s not designed to handle massive numbers of users, so if it does grow in popularity, they made need to shake things up. Since Meatspace is open source, groups can actually create their own separate Meatspaces for online meetings or work chats—something many online types would love to catch on, because it’s a fun and easy-to-follow way to talk to friends and colleagues. Just don’t ruin it by flashing everyone, please.