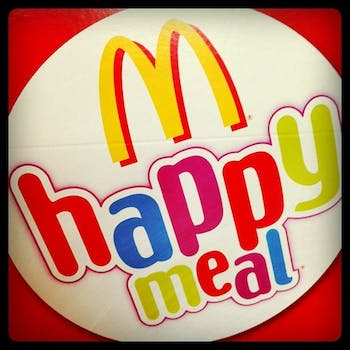 After its #McDStories hashtag promotion failed, McDonald's tried again on Twitter with #littlethings.

Oh McDonald’s, will you ever learn?

After the fast-food franchise flubbed a Twitter promotion yesterday, we cited three other examples of failed corporate tweet efforts. But rather than taking a deserved break from Twitter, McDonald’s dove right back in.

When the company asked customers to share #McDStories yesterday, they got a lot of quips about bad burgers and diabetes. Yet McDonald’s is back serving up a second Twitter hashtag, #littlethings.

“No line at the bank, a large tax refund, & those extra fries at the bottom of the bag. What are some #LittleThings that bring you joy?” tweeted @McDonalds today.

So far responses have been astoundingly tame.

“a good cup of coffee in the morning. #littlethings @McDonalds,” wrote @shannonsmith92.

As the campaign has progressed, however, users have moved beyond listing the little things to praising the McDonald’s social media department for their “bravery.”

“Perseverance in the face of adversity. #littlethings,” tweeted @lskrocks with a retweet about the new campaign.

Others debated whether McDonald’s has the right to use the #littlethings hashtag; Hilton’s @DoubleTree hotel brand announced a campaign using the same hashtag two weeks ago.

“Can Twitter offer exclusivity on a hashtag? McD’s jumped on #littlethings after @Doubletree ran a paid campaign,” noted @ToddWasserman, a journalist for Mashable.

Ah, it’s the #littlethings that matter—like checking on whether your hashtag is original.