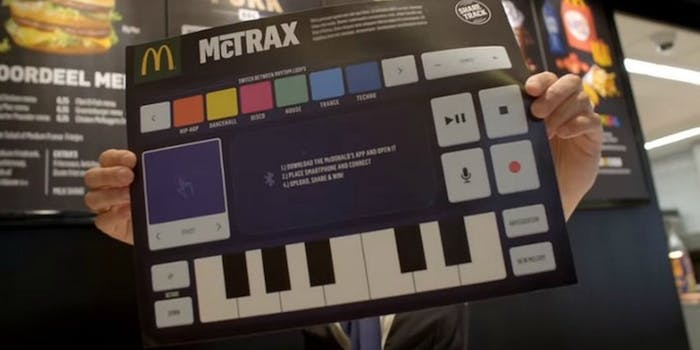 McDonald’s McTrax allows customers to record music on their placemats

Lay down a snappy beat while you eat your Big Mac.

Gone are the days when a recording studio was necessary to make music. Now all you need is a Happy Meal.

McDonald’s Netherlands recently posted a video to its Facebook page showing off the McTrax, a full music production tool designed into a paper placemat. Using conductive ink technology, McDonald’s printed a touch-sensitive control surface that wirelessly links to a smartphone via Bluetooth, offering customers a chance to hammer out beats between bites of a Big Mac.

The project is a collaboration between Dutch media agencies TBWA/NEBOKO and This Page Amsterdam. TBWA/NEBOKO supplied the sounds that drive the McTrax, and a smartphone placed in the center of the placemat provides the computing power. The placemat basically functions as a MIDI controller that lets users play with preprogrammed drum tracks (techno, house, trance, etc.), a synthesizer, Kaoss Pad effects, and a looping audio recorder.

Essentially, it’s all the tools necessary for millennial Dutch electronic music lovers to explore their creativity while sharing fries.

The project came to light thanks to a clever piece of open source music technology called AudioKit. Created as a map to help coders navigate the often confusing nuts and bolts behind proprietary audio production code, AudioKit offered a shortcut for the technical lead at This Page Amsterdam to create the McTrax without licensing any additional code, software, or intellectual property.

“Companies would spend years on R&D and teams of software developers to make basically what has now been done in under a month,” AudioKit programmer Jeff Cooper told the Daily Dot.

The developer behind the McTrax, Koert Gaaikema, approached the makers of AudioKit through its forums with a series of troubleshooting questions, but he kept his golden-arched client anonymous until the project was released.

McDonald’s was tight-lipped about details on the McTrax when reached for comment but said that the success of the single store pilot program means the McTrax has potential to be exported to other countries. So, don’t be surprised if an EDM edition suddenly appears at a McDonald’s near you.