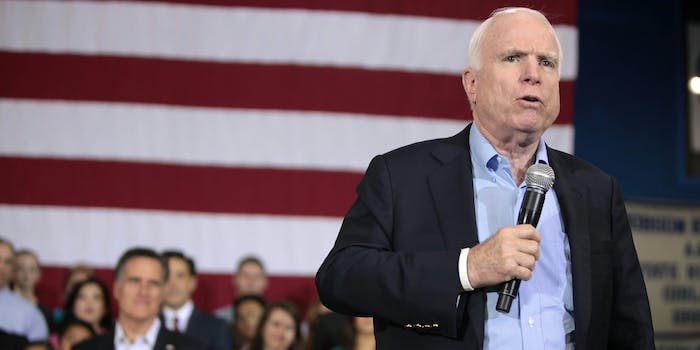 McCain condemns the ‘half-baked’ nationalism of the Trump era

McCain, who was diagnosed with brain cancer this summer, made his remarks at the National Constitution Center’s Liberty Medal ceremony where he was being honored. During his speech he referred to isolationist politics as “half-baked.”

“To abandon the ideals we have advanced around the globe, to refuse the obligations of international leadership for the sake of some half-baked, spurious nationalism cooked up by people who would rather find scapegoats than solve problems is as unpatriotic as an attachment to any other tired dogma of the past that Americans consigned to the ash heap of history,” McCain said.

The senator did not name Trump, but it was a clear rebuke of the president’s “America first” policies that have defined his administration.

To refuse US leadership for half-baked nationalism is as unpatriotic as any dogma consigned to ash heap of history https://t.co/Y07Sxa1b7V pic.twitter.com/Jf1nit7X3n

In what appeared to be a reference to the white nationalists who became emboldened and rallied in Charlottesville, Virginia, in August, McCain said: “We live in a land of ideals, not blood and soil.” The “blood and soil” term was chanted by white supremacists in Charlottesville during a rally, which caused counterprotesters to push back against the hate speech, eventually culminating in violence and one woman’s death.

“We are the custodians of those ideals at home, and their champion abroad,” McCain said. “We have done great good in the world. That leadership has had its costs, but we have become incomparably powerful and wealthy as we did. We have a moral obligation to continue in our just cause, and we would bring more than shame on ourselves if we don’t. We will not thrive in a world where our leadership and ideals are absent. We wouldn’t deserve to.”

McCain and Trump have clashed repeatedly in the past. During the 2016 presidential campaign, Trump attacked McCain and mocked his time spent as a prisoner of war during Vietnam. Earlier this summer, Trump also rage-tweeted against McCain after the senator dashed Republican hopes to repeal and replace the Affordable Care Act.

Last month McCain wrote a blistering op-ed in the Washington Post arguing that Congress didn’t have to “answer” to Trump and elected officials needed to “serve as a check on his power.”