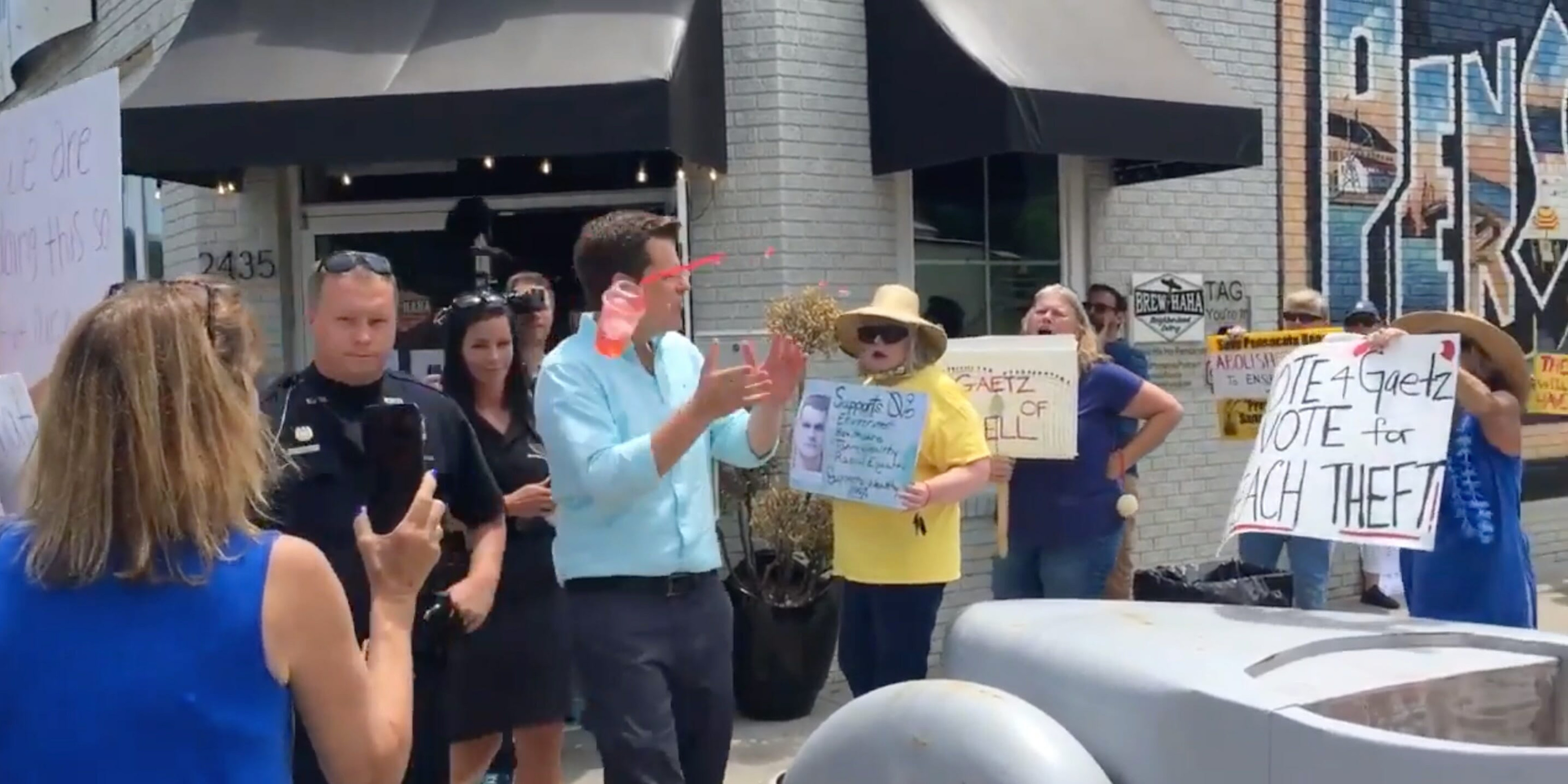 If you laughed at Rep. Matt Gaetz (R-Fla.) getting pelted with a fruity red drink, he probably thinks you’re an enemy of the people.

On Saturday, as Gaetz was leaving one of his “Won’t Back Down” town halls in Pensacola, Florida, to a chorus of protesters chanting “Hey hey, ho ho, Baby Gaetz has got to go,” a drink careened through the air, striking Gaetz and staining his shirt.

The incident was initially reported as a “milkshaking,” a fad started by our British friends on the other side of the pond, who have taken to expressing their ire with far-right blowhards by dousing them with sweet, creamy beverages.

The congressman, who once tried to get a Parkland parent kicked out of a gun violence hearing, later told media that he was actually douched with red Powerade. But based on Daily Dot’s extremely sophisticated analysis of videos of the incident captured from two different angles, the cup appears to have been that of a slushy.

So Gaetz may officially be the first politician to get slushied. This is not to be confused with getting sloshed, something he has been accused of in the past.

The woman, Amanda Kondrat’yev, was arrested and charged with battery. She is currently raising funds for her legal defense.

One might assume that Gaetz, who in addition to his duties as chief Trump suck-up in Congress, is facing a Florida Bar complaint for witness tampering, would be too busy to pay much attention to the buckets of laughter pouring in his direction.

One might also assume that in the wake of so many terror attacks by people on the far-right, as well as the Capital Gazette mass shooting, a member of Congress would think twice before sicking their far-right followers on journalists by calling them an “enemy of the people.”

One would be wrong.

It began when Tampa Bay Times environmental reporter Craig Pittman tweeted a link to an Orlando Weekly article about the incident, writing, “#Florida Rep. @mattgaetz hit with milkshake outside a restaurant called the Brew Ha Ha.”

Yet another example of the MSM truly becoming an #EnemyOfThePeople.

Will the great “paper of record” or other reporters call this out? I’m not holding my breath. Or my tongue. https://t.co/PIijOLqPiB

FWIW, the article states that “no one deserves to get hit with an unwanted projectile treat.”

But no matter. Predictably, Gaetz’s Twitter followers came for Pittman for the grave offense of stating the facts. To Pittman’s credit, he patiently pointed this out time and again.

Gaetz then set his sights on Miami New Times reporter Jerry Iannelli. Apparently, the millionaire Congressman didn’t appreciate Iannelli saying that, while he would not “*personally* throw a drink at Matt Gaetz,” he was “not upset that someone did.”

He may also have been peeved by Iannelli’s knee-slapping piece about Gaetz getting slushied called “Don’t Trample the Rights of Law-Abiding Milkshake Owners Who Want Milkshakes for Self-Defense.”

Member of the media saying he’s not upset someone threw something at me. #EnemyOfThePeople https://t.co/jWsN1b7oeA

Asked via Facebook messenger by the Dot to comment on Gaetz’s attacks on the press, the alleged milkshaker herself, Kondrat’yev, who briefly ran for Congress against Gaetz in 2016, responded by quoting the First Amendment.

She then wrote, “I fully support reporters and free press!”