Paralyzed from the chest down since 2011, Matt Ficarra promised himself he'd walk down the aisle with his bride at their wedding. He did.

If you’re looking for a good Monday morning cry, this’ll pretty much do it: A New York man who was paralyzed from the waist down in an accident three years ago walked down the aisle during his wedding using a battery-powered robotic exoskeleton.

Matt Ficarra, 30, became paralyzed in 2011 when he jumped off of a boat into the water without realizing how shallow it was. Although he hasn’t been able to walk since, he made a promise to himself that he would not get married in a wheelchair after he proposed to his girlfriend Jordan Basile, 27, last winter. “I told myself that I would walk with my bride down the aisle,” Ficarra told the Syracuse Post-Standard. 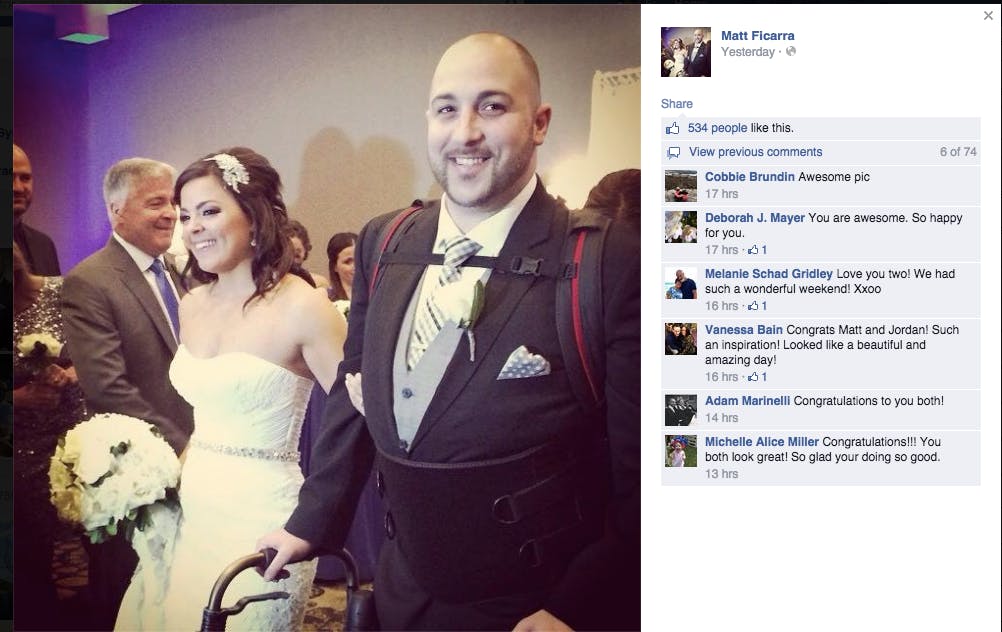 Ficarra made good on his promise with the help of the Ekso, a wearable robotic exoskeleton that, according to its website, “enables individuals with any amount of lower extremity weakness” to walk again. The user straps the Ekso to his body and controls the legs by shifting his weight, which activates sensors that enable the device to take “steps.” Battery-powered motors in the legs drive them forward.

In the weeks leading up to his wedding, Ficarra made the seven-hour drive from his hometown to a Pennsylvania rehabilitation center every week, so he could practice walking with the Ekso suit. He finally got to wear it when he exchanged vows with Basile last Saturday, posing for pictures with guests in the Ekso before returning to his wheelchair.

The Ekso is not intended for everyday use, and currently it’s only available in a handful of rehab facilities. But the company is releasing an exoskeleton designed for home use in the summer of 2015, which Ficarra hopes will help him permanently regain the ability to walk again. Ficarra and his family have launched a YouCaring crowdfunding page to raise money for the suit.