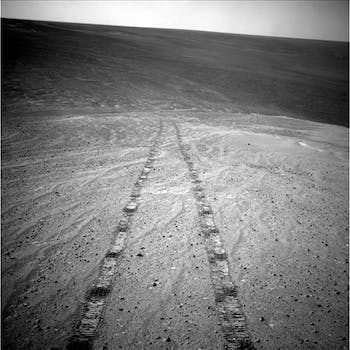 Can a long-distance fix solve the Mars rover’s ‘amnesia’?

It began its three-month mission in January 2004.

The Mars Exploration Rover Opportunity is finally showing signs of age after years of exploring the Martian surface and beaming data back to Earth.

Opportunity, which began what was supposed to be a three-month mission in January 2004, is now suffering from what NASA engineers are calling “amnesia.” In response, the Opportunity team is currently writing a fix that will allow them to hack the rover’s software remotely. If all goes well, Opportunity could resume normal operations within a couple of weeks, according to Mars Exploration Rover project manager John Callas.

Problems with Opportunity’s flash memory have intensified in recent days, according to NASA’s Jet Propulsion Lab, causing the rover to constantly reset itself.

The problem arose when one of the rover’s flash memory banks malfunctioned, causing the rover to store telemetry data in the more volatile RAM memory. Unlike data stored in the flash memory, items recorded in RAM are lost when Opportunity “wakes up” after shutting off during Martian nights. “That’s why we call it amnesia—it forgets what it has done,” Callas explained.

To make matters worse, Opportunity ceased communicating with its operators over the Christmas break. Before leaving for the holidays, NASA engineers programmed tasks over the three sols (Martian days) during which they would be absent from the controls. Opportunity carried out its tasks over the first sol, but it did not operate as instructed over the second and third sols.

Finally, after 10 years of consistent operation, Opportunity even failed to communicate with NASA. When Opportunity stops talking, “we get very, very worried,” said Callas. Fortunately, after sending new instructions after the break, Opportunity responded with a “beep” and resumed work.

Here on Earth, all most of us can do is let Callas and his team continue their work and hope the proposed fix gets Opportunity rolling again. As they do so, it’s worth pausing to consider the fact that the Mars rover has already logged almost 26 miles and has outlasted its life expectancy by a multiple of 40, giving rise to new notions about the potential habitability of the Red Planet.