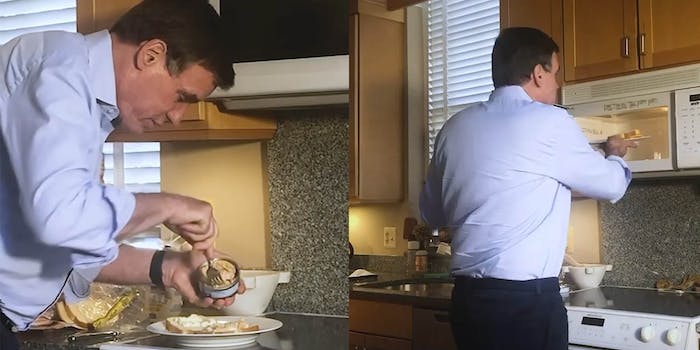 It’s kind of understood that all politicians are inherently psychopaths. I don’t necessarily mean that in a negative way, just that you need some of those amoral, narcissistic, delusional tendencies to want to run for office, let alone win.

The average, well-adjusted person doesn’t think they are qualified to be in charge of a nation, and even if they did, they have the sense and wherewithal to not bother to do it.

You need to lack some semblance of a soul and a conscience to run for office.

And now, thanks to all of us being locked inside due to quarantine we are free to watch as, the facade of the office stripped away, all our leaders most inhumane tendencies manifest.

Take Sen. Mark Warner (D-Va.), who Instagrammed himself making a tuna melt. When you can’t go to the diner, why not bring the diner home? Whip up some tuna salad—a little minced red onion and celery, some mayo—and plop it on some well-toasted bread. Hit that with a slice of cheddar, toss it under the broiler and look. Lunch! Delicious lunch.

That is… that is not what happens here.

Warner takes two slices of untoasted white bread, adds mayonnaise (“plenty on both sides”), slops some undrained canned tuna on there, then tops it off with two slices of prepackaged, deli-sliced, “medium” cheddar, which he doesn’t even evenly distribute, instead tossing both on top.

Then he socks the whole thing in the microwave. What that mess becomes… I shudder to even speculate. Hot runny mayo slippoing off waxy cheese on top of a molten core of processed tuna?

The bread would just be slop, like when those competitive eaters dunk their hot dog buns in water.

Term limits, vote them out, abolish the Senate. Any is a more reasonable future than imagining a world where the people tasked with making society function are consuming food like this.

Warner was a leading possibility for PRESIDENT at one point.

Psychopaths. All of them.