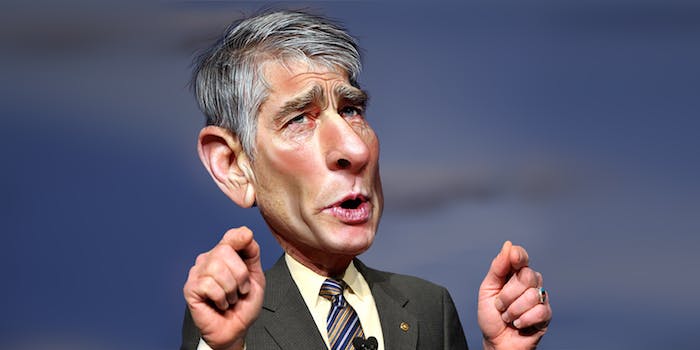 In the end, it wasn’t even that close: Republican Cory Gardner scored 49.6 percent of Coloradans’ vote to Udall’s 44.9 percent.

Though he only served one term in the Senate, Udall was active in privacy matters, joining the Senate Intelligence Committee and helping Ron Wyden (D-Oreg.) warn the American public, from a position of inside information, of rampant government spying. As Vox notes, in 2012, a year before NSA systems analyst Edward Snowden leaked documents showing the agency’s vast surveillance programs, Udall and Wyden wrote that Americans would be “stunned” to learn what the NSA could and does do under the Patriot Act.

When Snowden’s documents revealed an NSA program called PRISM, which taps American tech companies for their users’ communications, the NSA wrote a “fact sheet” to quell concerns. But it was Udall and Wyden who wrote an open letter to the American public calling those claims inaccurate; though, abiding by U.S. law about classified information, they couldn’t clarify just what that was. Udall also filed friend-of-the-court briefings in a lawsuit against the government for the NSA’s practice of collecting Americans’ phone records en masse.

Despite polls showing that a substantial portion of Americans were upset about Snowden’s revelations—and that number varied by poll—only one bill promising reform made any progress in Congress, the USA Freedom Act, which passed the House in May. But privacy advocates say it won’t actually do much to reign in NSA powers, and the Senate hasn’t touched it.

Udall, who once seemed to have a commanding lead in his reelection bid, had been criticized for running a weak reelection campaign. Some privacy advocates hope that he’ll use the remainder of his term being an even bigger thorn in the NSA’s side.

I hope @MarkUdall will use his last days of immunity in the Senate to tell the American people the truth about the totality of #NSA spying.

Photo via DonkeyHotey (CC BY SA 2.0) | Remix by Jason Reed