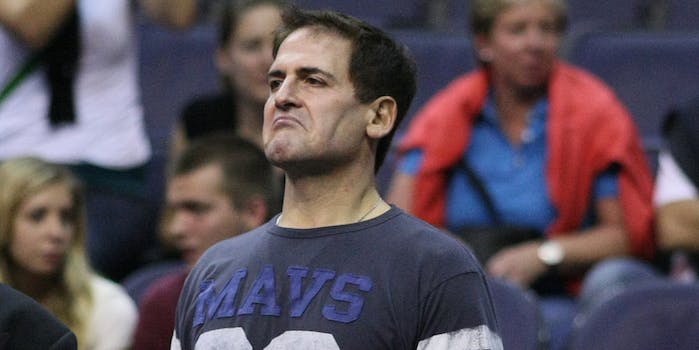 “‘Don’t hurt me big mean company’ is always a compelling populist argument. But in this case, it’s not based in reality.”

Wheeler’s net neutrality plan “doesn’t take into account high bit rate apps and apps that require minimal latency,” Cuban told the Daily Dot in an email, referring to apps that may need faster-than-average Internet connections. “Those require paid prioritization and not having the option available, or possibly requiring a court battle to get it, could severely damage future advances.”

Wheeler’s proposal would reclassify broadband Internet service under Title II of the Communications Act of 1934, allowing the Commission to regulate broadband service like a public utility, such as electricity or water. Internet freedom activists have long argued that Title II reclassification is the only way to ensure that the principle of net neutrality, which stipulates that all data be treated equally between Internet service providers (ISPs) and their customers, endures legal challenges from ISPs and protects Internet users against censorship or certain types of price gouging.

The downside to pushing broadband under Title II, says Cuban, is that it puts unnecessary constraints on future Internet-based businesses by restricting paid prioritization deals, also known as “fast lanes.”

“Bottom line is that the future of the Internet is not watching movies,” Cuban said. “It’s apps we haven’t seen yet, and I prefer not to have the FCC as a consideration in their future.”

Cuban sold his website Broadcast.com for $5.7 Billion to Yahoo in 1999 and is an investor in multiple Internet companies. He also owns the Dallas Mavericks NBA team and other major businesses. Cuban regularly appears on the ABC show Shark Tank as an investor.

Cuban’s anti-net-neutrality sentiment chafes against a popular argument for net neutrality: that net neutrality protects, rather than hampers, startups. As the theory goes, burgeoning Internet startups may not be able to compete with the major players who can afford to pay ISPs for faster access to their services. But Cuban says that the example of startups hurt by large competitors “isn’t based in reality.”

“It’s inventive. If it had happened, it would be worth considering. But it has never happened,” Cuban said. “It’s far cheaper and easier to start an online company than it has ever been. ‘Don’t hurt me big mean company’ is always a compelling populist argument. But in this case, it’s not based in reality.”

Cuban also worries about how future FCC commissioners would approach net neutrality, implying that this wildcard poses a potential risk for Internet-business investors.

“There is no way to account for how future FCC commissioners deal with these issues,” he said. “They could approach it 180 degrees differently with every commission overhaul.”

Cuban appears to be in the minority when it comes to the net neutrality debate. Following publication of Wheeler’s editorial in Wired, which outlined his net neutrality plans, Internet advocacy groups erupted in support. Josh Levy of the pro-net-neutrality group Access Now called the plan “a historic moment in the history of the Internet,” while the equally enthusiastic Electronic Frontier Foundation dubbed it a “huge win for the open Internet.” And last year, the FCC received over 4 million comments on net neutrality. Of the first 800,000 comments, which were analyzed by the Sunlight Foundation, less than 1 percent opposed strong net neutrality rules. (Approximately 60 percent of comments in a second set analyzed by the Sunlight Foundation opposed net neutrality regulations, a spike attributed almost entirely to an anti-net-neutrality commenting campaign by the Koch brothers-affiliated group American Commitment.)

For Cuban, the ideal regulatory standards for the Internet are “just as it is now.” Thing is, he might just get exactly that.

“I’m glad that Mark likes the rules as they exist now,” Michael Weinberg, vice President of Internet freedom advocacy group Public Knowledge, told the Daily Dot in an email. “Since the proposed rules largely formalize the assumptions that have been governing the Internet for over a decade, he should not experience too much disruption after they are voted on.”

The FCC will vote on Wheeler’s proposal during its Feb. 26. meeting.

Clarification: The Sunlight Foundation’s analysis of net neutrality comments to the FCC included two batches; less than 1 percent of the first set of comments expressed opposition to net neutrality regulation. The second set, most of which were submitted after a coordinated campaign against net neutrality rules, showed 60 percent opposed FCC-imposed net neutrality.