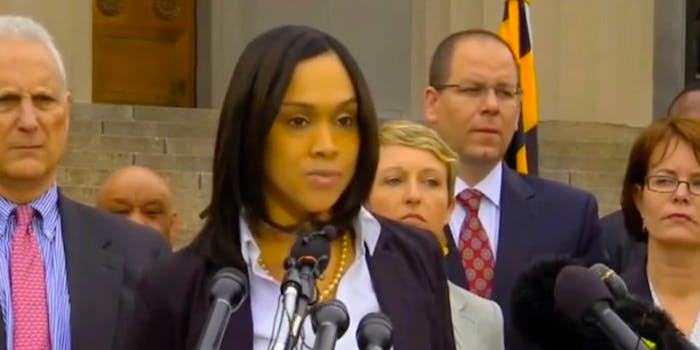 Meet the prosecutor at the center of the firestorm.

On Friday afternoon, the name Marilyn Mosby began trending on Facebook, just below stories about the upcoming sequel to the 50 Shades of Gray movie and the Southern California man who punched a bear in the face. She might be trending right now. 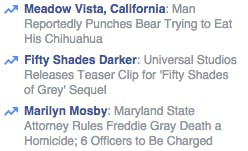 Mosby is Baltimore‘s state’s attorney and is the woman responsible for filing homicide charges against the six Baltimore Police Department officers allegedly responsible for the death of 25-year-old Freddie Gray last month. Gray’s death sparked nationwide protests along with a destructive riot in Gray’s hometown of Baltimore after his funeral on Monday.

When announced the charges on the steps of the War Memorial in downtown Baltimore, cheers erupted from the assembled crowd. As news of the decision spread over social and traditional media, people across the city took to the streets in celebration. The fanfare spread online, where Mosby quickly became her own meme—an icon of unprecedented governmental badassery.

#MarilynMosby and her crew look like they ready to wreck shop, I hope so, brace yourself #Baltimore pic.twitter.com/oCONp8Blw8

Hope and changeFor much of Baltimore’s African-American community, the decision to prosecute the officers involved in Gray’s death was a welcome shock—especially in light of decisions by grand juries in Missouri and New York not to file charges against the police officers involved in the deaths of Michael Brown and Eric Garner, respectively.

When Mosby was asked by a reporter at Friday’s press confrence about what sort of actions will stop more people like Gray from being killed by police, Mosby’s answer was simple: accountability. The reporter followed up by asserting that such accountability hasn’t always occurred, either in Baltimore or around the country. “You’re getting it now,” Mosby responded.

The contrast to Bob McCulloch, the Missouri prosecutor tasked with securing an indictment for Darren Wilson for the shooting death of Michael Brown, was striking. In presenting the Ferguson grand jury’s decision not to indict, McCulloch appeared to many observers more like Wilson’s defense attorney than a government prosecutor.

Marilyn Mosby is not Bob McCulloch.

Mosby grew up in Boston, raised by a single mother. She attended Tuskegee University in Alabama and then Boston College Law School. After graduating, she worked as Maryland’s assistant state’s attorney.

Elected to the position earlier this year, NBC News notes that the 35-year-old Mosby is the youngest top prosecutor of any major city in the United States. She campaigned on getting tough on both repeat offenders and police misconduct.

After being elected, she said that prosecutors in Baltimore had the “toughest job in America.”

Both of Mosby’s parents were police officers. She told Baltimore Magazine last year that her familiarity with law enforcement has given her an appreciation of the difficulties of police work while also highlighting the importance of rooting out those who abuse their power. “I know that the majority of police officers are really hard-working officers who are risking their lives day in and day out, but those really bad ones who go rogue do a disservice to the officers who are risking their lives and taking time away from their families,” Mosby said. “You have to apply justice fairly and equally, with or without a badge, and that’s what I intend to do.”

Mosby’s husband, Nick, is a member of the Baltimore City Council, whose public profile has also been elevated considerably by the past week’s events. Councilman Mosby stormed out of a contentious interview with Leland Vittert of Fox News when the reporter repeatedly asked Mosby about moral implications of the looting that accompanied Monday’s protest while brushing off the elected official’s assertions that the underlying social and economic conditions affecting Baltimore’s lower income residents were far more worthy of consideration.

Councilman Mosby’s assertiveness won him a considerable amount of positive press coverage from national media outlets like NPR and the Huffington Post.

Marilyn Mosby’s role in prosecuting the Gray case has not been without controversy. A police group has called for Mosby to recuse herself and appoint a special prosecutor due to her personal relationship with the Gray’s family attorney, William Murphy, as well her husband’s place on the city council. The Baltimore Sun reports that Murphy donated $5,000 to Mosby’s election campaign and served on her transition team.

“It is clear that your husband’s political future will be directly impacted, for better or worse, by the outcome of your investigation,” an open letter from the Fraternal Order of Police, Lodge 3, states. “In order to avoid any appearance of impropriety or a violation of the Professional Rules of Professional Responsibility, I ask that you appoint a Special Prosecutor to determine whether or not any charges should be filed.”

Mosby insisted to the Sun that she doesn’t suffer from any conflicts of interests on the case, and she noted that the group donated in support of her opponent during the election campaign.