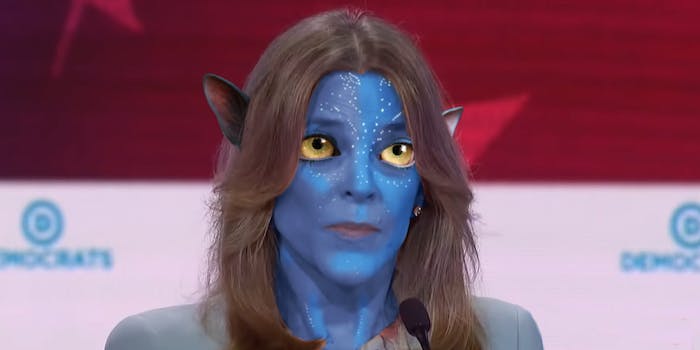 Cast your minds to the distant past of 2010. Barack Obama was president. Bill Cosby was still America’s dad (though he really, really shouldn’t have been), the fidget spinner was a Torqbar.

And Avatar was king of the box office.

Released in December 2009, the movie about the Na’vi of Pandora was a smashing success, ultimately grossing nearly $3 billion and inspiring another wave of hero-worship for director James Cameron.

Williamson’s Avatar buzz was so intense that two months later she was still high in the branches of the Tree of Souls.

Reactions to the resurfaced tweets ran the gamut, from “yes queen,” “Marianne, this is a sizzling take,” to “Okay, now I’m worried about her,” and “Did people really think this back then?” Regarding the last: Yes, yes, they did. We know.

Among the many to point out that Avatar was essentially a remake of FernGully was someone known as Marshmallow Peeps, who tweeted, “Omfg…it was goddamned FernGully and it wasn’t that good!!!” Based on that screen name, Mx. Peeps knows a thing or two about things that are awful and gross.

Yearly reminder that avatar was one of the biggest budget 3d films of it's time, and it's logo was written in papyrus. pic.twitter.com/FDWSCvAf7f

When old tweets come back to haunt you.

HOW IS THERE MORE THAN ONE OF THESE

You guys remember when people would hashtag fb to send their tweets to Facebook?

It turns out that Williamson’s Avatar fangirling didn’t stop with tweets, however. The Daily Dot unearthed footage from 2010 of her waxing poetic about the movie during an interview series with Elliott Mintz.

As they waited for snacks to arrive, Williamson oh-so-casually asked if Mintz had seen it yet. He hadn’t.

That was the in she needed.

Williamson gushed that the film is “spiritually unbelievable,” “James Cameron should win the Nobel Peace Prize,” and said it “has the capacity to really help create a tipping point.”

While Mintz remained silent, probably thinking “I used to hang out with John Lennon and now look at me,” she continued in this vein, comparing the movie to Dances with Wolves and The Mission, and opining that it is a portal in the tradition of fairy tales like Harry Potter and Superman, which she called “a Christ story for children, really.”

“I think the idea that that’s not a serious movie is preposterous. I think it’s deeply serious and it moves into a part of the brain because of the enchanted, because of the fairy tale mythological,” she said, gesturing with feeling.

Eventually sensing that she’d lost her audience, Williamson wrapped it up after two solid minutes.

“I heard James Cameron say in an interview there’s a fine line between an archetype and a cliché. And he’s absolutely right,” she said. “I don’t find the movie cliché at all. I find it deep, great. Big fan.” Yeah, we got that.

No matter what happens on the campaign trail, Williamson does have one thing to look forward to in 2021: After many delays, the long-awaited (in some circles) release of Avatar 2 is set for December 17, 2021.