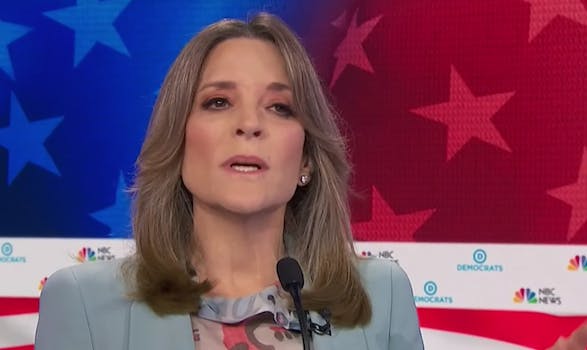 The self-help guru and presidential candidate isn't hiding it anymore.

In true anti-vaxxer spirit, Marianne Williamson has put forth a new anti-vaccine proposal on the preferred social media platform of science skeptics: Facebook.

Thursday night, Williamson posted a paragraph long proposal regarding vaccines that began, “As president, I would order the Centers for Disease Control to establish an independent commission to review/reform vaccine safety.”

Williamson went on to say, “Calling people who express any concern or questions about bundling, number of vaccines, neurons-toxins and so forth “anti-vaxx” is both incorrect and unfair.”

But just saying you aren’t anti-vax doesn’t make it so.

This is something of a “mask-off” moment for Williamson’s critics, who have long accused the Democratic presidential candidate and self-help guru of harboring anti-vaccine sentiments.

Marianne Williamson has no business running for president. This is dangerous anti-vaccine crank stuff elevated to the national conversation simply because she's decided she deserves an office she has no qualifications for whatsoever. https://t.co/Fw1YKUWzqz

Early in her campaign, Williamson was more demure about her stance on vaccines. In July, she explicitly tweeted that she is not anti-vax.

Misrepresentations of my work are in high gear this morning, so just in case it need be said: I am not anti-vaxx. I am pro-science & medicine. I’ve never suggested to anyone they should pray away their illness & not see a doctor. I’ve never blamed a victim nor fat-shamed anyone.

At least twice on the campaign trail, Williamson has tried to distance herself from anti-vax claimes. In June, she told a New Hampshire audience that her issue with vaccines was government overreach, calling them “Orwellian.”

Marianne Williamson leans in to vaccine skepticism in NH: “To me, it’s no different than the abortion debate. The US government doesn't tell any citizen, in my book, what they have to do with their body or their child.”

In August at the AFSCME Democratic candidates forum, Williamson said, “Vaccines work. That has never been my issue.” But then she added, “Big Pharma,” is in need of “legitimate and responsible oversight.”

Activists familiar with Williamson were unconvinced that she had changed her ways from her past statements on spiritual and emotional healing and support of pseudoscience.

Skepticism towards medical science has been a cornerstone of Williamson’s career dating back to her 1992 book, A Return to Love: Reflections on the Principles of A Course in Miracles. Disability activists used the hashtag #CripTheVote to speak out against Williamson when she rose to some prominence following early debate performances this summer.

“I object to her view that sickness, illness, and disability is an illusion that can be ‘wished’ away by positive-thinking,” activist Alice Wong told the Daily Dot. “No amount of prayer or forgiveness by me will ever help me walk again. Her anti-science beliefs harm millions of people with depression, other mental health disabilities, or HIV/AIDS that take medications and other treatments in order to survive.”