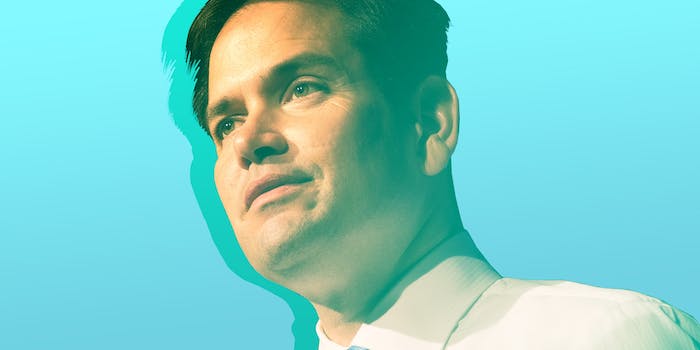 'Today is that terrible day you pray never comes.'

Rubio has accepted more than $3.3 million in political donations from the NRA and that means he’s the sixth-highest NRA benefactor, according to the New York Times. Users on Twitter were quick to remind him.

.@marcorubio received $90,205 in campaign donations from gun rights groups during the 2015-2016 campaign cycle and received an "A+" grade from the NRA. Rubio has received $3,303,355 over the course of his career as an elected official. https://t.co/Y8EJPrCR5V #thoughtsandprayers https://t.co/OKBHuajKeT

.@MarcoRubio has received over $3.3 million from the NRA– the sixth most in Congress.

This is your state, Senator. I hope that blood money was worth it. #GunControlNow

It wasn’t just the Florida lawmaker. Many elected Republicans were blasted for supporting the NRA.

This guy fought for a bill to allow guns on campuses https://t.co/f3mf586pKV

Rubio has said that he doesn’t believe gun control would have stopped recent mass shootings. “None of the major shootings that have occurred in this country over the last few months or years that have outraged us, would gun laws have prevented them,” he told CBS during his presidential campaign.

The details of Wednesday’s shooting remain unclear, and indeed there are more guns than people in the United States, according to the Washington Post—more than 310 million of them. The Washington Post concurred with Rubio: None of the recent mass shootings in the U.S. that made national headlines would have been curbed by the proposed gun-control regulations. But critics argue that speaks more to the problems with the proposed legislation. Likewise, the NRA has blocked gun violence research for more than 20 years, which could lead to more effective legislation proposals.