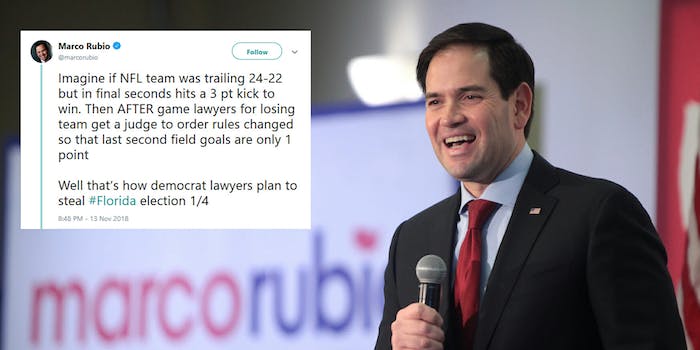 The razor-thin margins in the state’s gubernatorial and Senate races have led to recounts. And it’s been creating angst among some Republicans—especially the president—who want to see the state go red, like it appeared to be on election night last week.

In an effort to express his frustration with the voter drama in Florida, Rubio decided to try and use a sports analogy in a Twitter post to describe what is happening.

“Imagine if NFL team was trailing 24-22 but in final seconds hits a 3 pt kick to win. Then AFTER game lawyers for losing team get a judge to order rules changed so that last second field goals are only 1 point Well that’s how democrat lawyers plan to steal #Florida election 1/4” the senator wrote, following it with a series of tweets about the election process.

Imagine if NFL team was trailing 24-22 but in final seconds hits a 3 pt kick to win. Then AFTER game lawyers for losing team get a judge to order rules changed so that last second field goals are only 1 point

Many people fixated on the fact that Rubio referred to a “3 pt kick,” instead of what every football fan can tell you is a “field goal.”

Typical Dems, settling for a 3 pt kick when they could have clinched the footcontest with either a 7 pt tosscatch or even a run jumpety-land https://t.co/jDZuCjnVKL

When you're so excited about your awkward football analogy that you type "3 pt kick." https://t.co/1cKts3umcp

from now on all terrible analogies should be referred to as “3 pt kicks” https://t.co/4mnAHPML6u

This is the most outrageous thing Rubio’s said so far.
“hits a 3 pt kick”
Seriously… can you do anything right?!?!! https://t.co/tPLhe1bYlP

Others just dunked on Rubio and his odd football-election tweet.

It would be super weird if lawyers intervened on behalf of a football team. But for lawyers to fight for all votes to be counted according to the Constitution and Laws of the US is not theft. https://t.co/LyGL4I601Z

Little known fact: This was the first draft screenplay for Any Given Sunday. https://t.co/f0SU7ELOjj

The situation is more akin to the refs calling out the chain crew to measure a possible first-down, but then right as they start to jog out a crazed fan in a diaper darts onto the field, flailing wildly and incoherently yelling about 3pt kicks and judges https://t.co/zCM30VN8c2

While some decided to use analogies they thought was more fitting.

Imagine if one team rigged the rules so they started with a 24-0 lead. Then the other team came back 24-22. Then you canceled rest of game before the other team could come back or had final score. That's what GOP trying to do https://t.co/EQytaOh0pD

Imagine if an NFL team was winning 24-22, and said, let's end the game in the third quarter before all the points can be tallied. That's really what you are urging. https://t.co/RJrouSYSie

Imagine if an NFL team were up 17-14 midway through the third quarter, then claimed the game was over, and when the other team scored a touchdown the first team started crying and saying they were cheating and said the league was corrupt with no evidence and undermined democracy. https://t.co/ZJJbcLt9TQ

On Wednesday morning, Rubio posted a bible verse: “What is crooked cannot be made straight, and you cannot count what is not there.”

Which many people found fitting given his tweet about field goals.

this is a good follow-up to the field goal analogy https://t.co/hlVzgysgPu