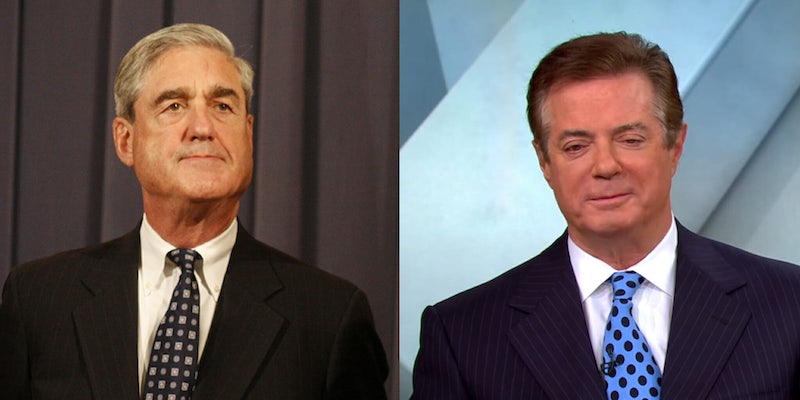 Paul Manafort, Trump's former campaign chairman, is the first to see legal action as part of the probe.

Manafort and his former business associate Rick Gates represent the first two people to face charges as part of Special Counsel Robert Mueller’s sprawling probe into Russian interference in the 2016 election and other related matters.

The charges brought up against Manafort and Gates were not immediately clear. Manafort was photographed this morning heading into the FBI field office in D.C.

Manafort and his lawyer just walked through the front door of the FBI field office in DC pic.twitter.com/DAgYAgFBU6

Gates worked with Manafort and his name appear on documents linked to companies the former Trump campaign chairman used to receive payments from politicians and members of the business community in Europe, according to the Times.

Manafort’s home was raided by federal authorities earlier this year and he reportedly is under investigation for violating tax law and whether he appropriately disclosed his lobbying work for foreign countries.

At the time of the raid, Manafort was reportedly told to expect an indictment. It was reported that Mueller may be attempting to build a separate legal case against Manafort in an effort to get him to divulge information in exchange for limiting his legal exposure.

Before working for the Trump campaign, Manafort received payment for his Ukraine-related work for former Ukrainian President Viktor Yanukovych.

Manafort and Gates are the first people to see legal action from Mueller’s probe related to Trump. The probe is looking into the finances of Trump-related campaign personnel and whether the president obstructed justice by firing former FBI Director James Comey.

You can read the New York Times report here.