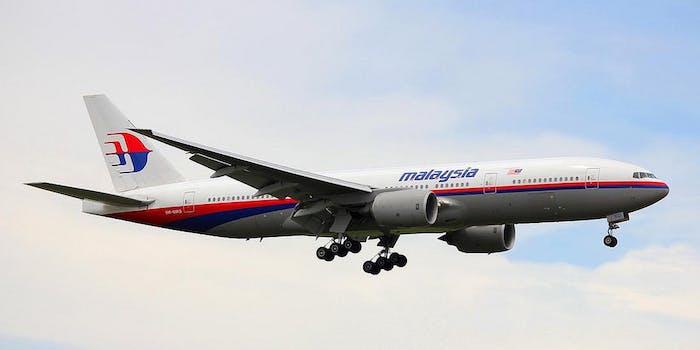 Amateur sleuths can now dive in to complete MH370 data

So you can solve the mystery of the missing flight from the comfort of your own cubicle.

The Malaysian government’s department of civil aviation has released the satellite data for MH370, the flight that mysteriously disappeared en route from Kuala Lumpur to Beijing almost three months ago. The Malaysian government has made the data public in response to criticism from relatives of the missing passengers, who have argued for increased transparency in the government investigation into the flight.

The 47-page report details the final automated communications of the flight, or “pings” that traveled between the plane and a satellite, before it disappeared. According to Australian air accident investigators, the data indicates that the flight ran out of fuel and crashed somewhere in the Indian Ocean while it was sending its last automated message. They believe it’s located within “around 25 nautical miles” of the flight’s last transmission, though investigators have failed to turn up any sign of the aircraft in that area.

So does the report yield any insight for aspiring sleuths looking to put an end to the mystery of flight MH370 once and for all? I mean, not really. The report is pretty technical, so unless you’re aviation-savvy enough to know the difference between “burst frequency offsets” and “burst timing offsets,” it probably won’t do you much good. (Aviation experts have argued that the report won’t do the relatives of MH370 passengers much good, either, with some saying the report is too technical and others saying it’s been too simplified for a layperson audience, glossing over important details).

Still, that probably won’t stop your blowhard relatives from combing over the data and using it to come up with alternate theories for the fate of ths missing plane and its passengers. Expect a 30-minute schpiel on alien hijackings when your Father’s Day barbecue rolls around.