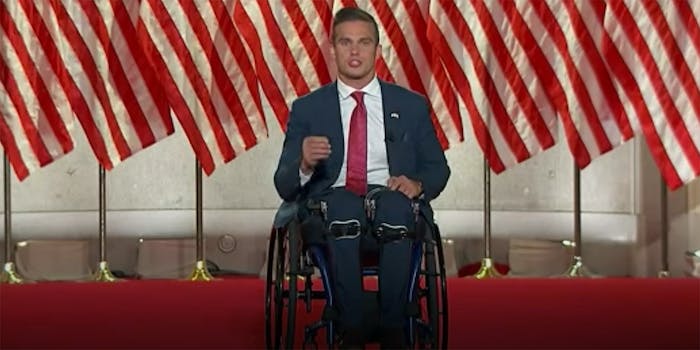 The guy you might know as the "cry more, libs" guy is back in the news.

Congressman-elect Madison Cawthorn (R-N.C.), the 25-year-old who tweeted “Cry more, libs” to celebrate his election night victory, has revealed in a new interview that he is seeking to convert Jews and Muslims to Christianity. The interview, published Monday on the Jewish Telegraphic Agency, is especially concerning to some because of his use of the phrase “Jewish blood.”

The article notes that Cawthorn is a “part-time preacher” as well as a “conservative firebrand” who has actively attempted to convert people of Jewish and Muslim faiths to Christianity in the past. According to Cawthorn’s campaign site, he attends Biltmore Church, a Christian megachurch in Hendersonville, N.C.

The article noted that Cawthorn claimed success in converting “culturally Jewish people” but not religious ones. It also recalled a 2019 sermon Cawthorn gave, captured on video, that made an eyebrow-raising point about the Gospel of Mark.

“If you have Jewish blood running through your veins today, this might not mean as much to you, but for someone like me, who’s a gentile, this means a lot,” Cawthorn said.

That was a jumping-off point for some to register alarm.

With comments like “Nothing good has ever followed that sentence,” “let me stop you right there,” and “the tell of all Nazi tells,” it’s clear that people were uneasy with Cawthorn’s use of “Jewish blood.”

Jewish Telegraphic Agency also noted in an August article that Cawthorn took down Instagram posts of his visit to Eagle’s Nest, Adolf Hitler’s German mountain retreat. Cawthorn termed it “the vacation home of the Führer,” and noted it was on his “bucket list” to visit, including screenshots of the deleted posts in its coverage.

Some Twitter commenters made the connection between Cawthorn’s turn-of-phrase and his choice of vacation spots.

Cawthorn isn’t exactly a fringe member of the GOP, but rather, regarded as one of its rising stars. He was featured prominently with a prime-time speaking spot at the Republican National Convention on his way to winning in the 11th District—the seat vacated by Mark Meadows to become White House Chief of Staff in March—with 54.5 percent of the vote. Cawthorn beat a Trump-endorsed candidate in the June primary en route to become the youngest person to be elected to Congress in the nation’s history.

Cawthorn, a wheelchair user since a 2014 car accident left him partially paralyzed, delivered most of his speech in his wheelchair before standing up to deliver the line, “Be a radical for our Republic … for which I stand, one nation under God, with liberty and justice for all.”