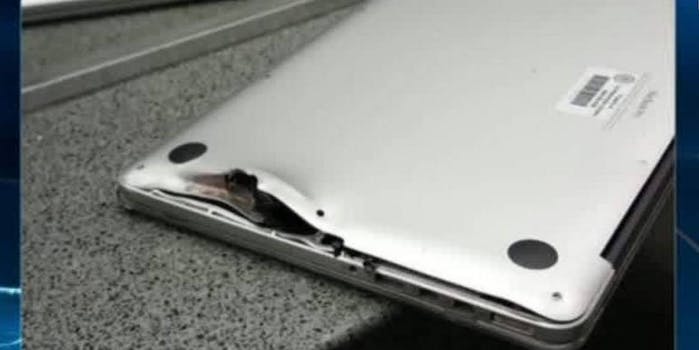 MacBook may have saved a man during Fort Lauderdale airport shooting

Its aluminum frame absorbed the impact.

A MacBook may have saved the life of a man who was at the scene of Friday’s shooting rampage at Fort Lauderdale-Hollywood International Airport.

A bullet travelling toward Steve Frappier’s back was stopped by his backpack and the aluminum frame of his Apple MacBook. The man told CNN’s Anderson Cooper on Friday, “The backpack saved my life. [I] dropped and the backpack was still on my back and I was turned in such a way where that at one point when the shooter shot toward my direction … there was a bullet that ricocheted.”

CNN showed images of the pierced laptop, which was struck on its bottom edge. The bullet seems to have ripped a hole into the frame of the computer, bending the aluminum in the isolated area around where it struck. It also does not appear to have penetrated the laptop’s lithium-ion battery.

Frappier went on to describe how he checked himself for injuries after feeling a force hit his back.

“I felt something hit my back,” Frappier said. “It was only later when I went to the bathroom to check myself out that the bullet had entered my backpack, hit my laptop, and then later when I gave my backpack over to the FBI for investigation, they found the bullet in the pocket of my backpack.”

The shooting left five people dead and eight others injured.