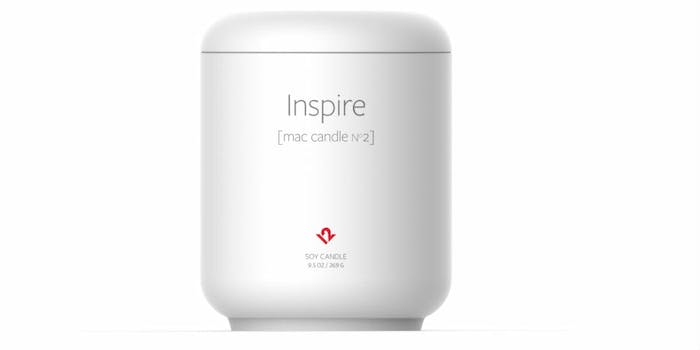 The Mac-inspired candle is back after a new upgrade

Waiting for someone to develop a Mac costume at this point.

Apple fans have something new to be excited about. Is it an iOS update or new Apple product? Nope. It’s the new latest line of Mac-inspired candles from Apple accessory company Twelve South.

The online retailer unveiled its second line of scented soy candles Tuesday, a follow-up to the first line, New Mac, that sold out last year. If you ever wondered what the tech giant’s cleanly designed computer line smells like, this candle won’t give you an answer, but it does pair nicely with any Apple-phile’s collection. You could use it in your bathroom, kitchen, or living room, or even gift it to friends who swear by the tech company.

Titled Inspire [mac candle N°2], the sleek, white new pod vessel is a departure from its first simple, black design that fit in with the rest of the candles around your house. This candles is a cut above the rest with its glossy exterior. It honestly reminds me a little of how BB-8 looks next to R2-D2.

The hand-poured candle comes in one scent that contains “strong notes of bergamot, lemon, and tarragon that will clear your mind and stimulate creativity,” according to the company’s website. I guess that means you’ll be inspired to spend less time on Twitter, Buzzfeed quizzes, and reading niche articles like this New York Times piece on depressed fish? It’s dubious as to what a Macbook smells like or if it even has a smell, but Twelve South is taking a stab at it. Does bergamot smell like the excitement of a new laptop mixed with underlying despair of spending too much money on it?

In addition to a new scent and look, this candle is $5 more expensive than the last line. That’s not necessarily a bad thing as some of the proceeds will go to the charity FIRST, which offers programs that help young people pursue education and career opportunities in STEM related fields.