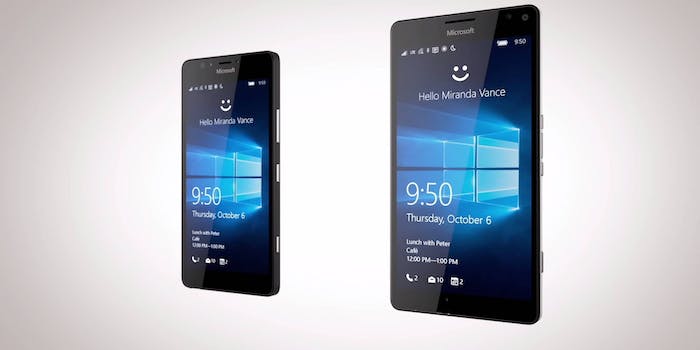 After 18 months of waiting, Microsoft Lumia fans have a new flagship device in their scopes.

That would be the Lumia 950 and 950 XL. Announced on Tuesday at Microsoft’s Windows 10 Devices event in New York City, Microsoft Vice President Panos Panay appeared to be on one-too-many coffees as he joyously unveiled the device. He even joked about leaks that happened the week prior to the event.

Both devices sport WQHD (2560×1440) OLED displays, with 5.2 inches reserved for the 950 and 5.7 inches for the XL. Both also have low-battery usage glance displays that allow users to see important information without having to turn on the device. Panay was also geeking out on the fact that the phones have two antennae, allowing the devices to pick up the best signal possible. Both have removable batteries, 32GB of onboard memory, with a Micro SD expansion slot up to 2TBs.

Any fan knows that the major selling point with any Lumia device is the camera. Carl Zeiss optics are back once again, with a 20MP PureView shooter, optical image stabilization, 4K video capture, and triple LED RGB flash. Oh, and a dedicated shutter button will also be on the device, just like with past Lumia devices.

The coolest thing about both devices is that they feature the same liquid-cooling technology found in the Surface Pro 3. Yes, these phones are actually liquid cooled. Both phones will also have biometric authentication, meaning the phone will unlock with just a look.

One more thing of note: USB Type C. The new USB standard will be on the Lumia 950 and 950 XL, and brings with it some unique features. The obvious one being faster charging and better file-transfer rates. Microsoft claims that the phone can get a half charge in 30 minutes.

But the real draw of USB Type C is Microsoft Continuum.

This is futuristic stuff: Since the 950 and 950 XL are essentially running Windows 10, the phone is a Windows 10 PC. Using a dock, the phone can be plugged into a monitor which then runs Windows 10. That means you can use Microsoft Word, with a real keyboard and mouse, all being processed on your phone. Not only that, apps like Netflix can also be used. While the phone is plugged in, phone functionality doesn’t stop. Users can still check text messages, for example.

For those who still want a Windows 10 phone, but don’t have the money to drop on these new flagships, Microsoft also quickly unveiled an entry-level device, the Lumia 550. It has an HD display, a 5MP camera, 8GBs of storage, all on a 4-inch package. It may not be a powerhouse, but it’s only $140.

Both the Lumia 950 and 950 XL are set to launch in November. Carrier information was not revealed, although we hope carrier exclusivity doesn’t rear its ugly head.