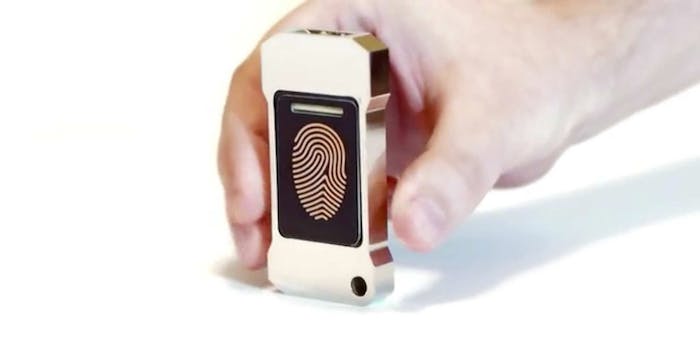 This flashlight is powered by body heat, not batteries

Finally, your body is good for something again.

A flashlight without a battery is basically useless—with the exception of the Lumen, a battery-free flashlight that is powered by body heat.

The keychain-sized Lumen generates its power with a small thermoelectric generator (TEG), which uses contrasting temperatures to generate an electrical current. The upper section of the TEG leeches heat from a person’s touch, while the bottom section remains cooler.

According to Ross Zhuravskiy, the creator of the Lumen, a difference of around 16 degrees Fahrenheit is enough to generate the energy required to power a Super Bright LED light. When the difference in temperature is larger, the excess power is stored in a capacitor for future use.

Zhuravskiy told the Daily Dot he got the idea for the Lumen while working in his factory, which is equipped with hundreds of mercury-vapor lamps. “Each month several of them burn out. And each month I pay [a] special company for utilizing them,” he explained. “Long story short, I began thinking about [an] alternative way of solving that problem.”

While it might make for a better story to say a lightbulb went off in Zhuravskiy’s head and he instantly had the idea for Lumen, he said his discovery process started by “typing ‘Google’ in address bar.”

Thermoelectric generator technology has been a potentially tenable option for power generation. The PowerPractical line of camping products is one of the few consumer products to use thermoelectric materials to generate an electrical current. Researchers have also suggested possible applications to power small electronic devices like smartwatches, while others have attempted to harvest heat from an engine’s exhaust to generate electricity.

Zhuravskiy technically isn’t even the first to the flashlight concept; a Canadian high school student built a working prototype that operated on the same principle in 2013 and earned herself a finalist slot in at the Google Science Fair.

But Zhuravskiy has already bypassed the conceptual stage; he’s built multiple working prototypes and has access to the equipment in his factory to make the Lumen the first commercially viable version of the product.

“I can’t say that development process behind Lumen was long and hard,” he said. “You know, when you do something that you believe can make the world better work never seems hard.”

Lumen’s ability to generate energy is generating a considerable amount of interest. The campaign for the Lumen reached its fundraising goal on Kickstarter in a matter of hours and is still accepting backers who want to get their fingers on the flashlight. Pledges starting at $35 can get the Lumen, with delivery estimated by February.

He said the pledges have been “overwhelming,” and he’s glad to see people “appreciated my work and share my attitude to ecology problems.”

While he’s concentrated on the mass production of Lumens, he’s also looking forward to what else he can possibly do with the technology.

“This technology is scalable. What I do next? I don’t know yet,” he said, though he is sure he will make some form of successor to the Lumen that will be powered by an alternative source of energy.

One potential future application: Zhuravskiy mentioned during the experimentation process that he realized “our bodies generate enough energy to power [a] modern smartphone.”

The projects from here will depend on “how many people will support me during my first steps,” he said. But regardless of what the Lumen technology leads to, Zhuravskiy said the support he’s received so far makes him think he’s on the right track.