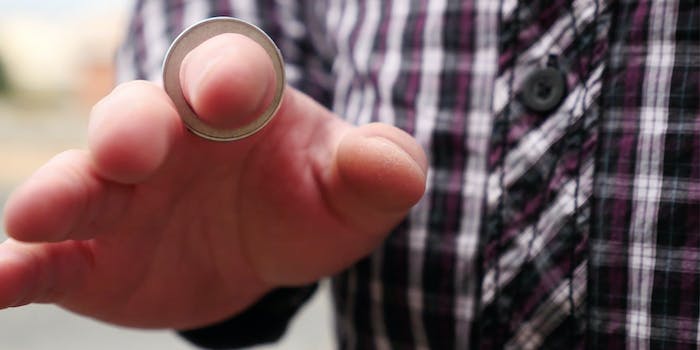 This high-tech ring is a massive Kickstarter failure

Every now and again, a crowdfunding project comes along that doesn’t just underachieve, but so totally and utterly fails to deliver what it promised, that you just have to laugh.

The Logbar Ring is one of this products, if Snazzy Labs is to be believed.

Raising a monumental $880,998 on Kickstarter in April 2014 off the back of its claims to be able to “shortcut everything,” the smartring saw write-ups in Time, TechCrunch, Mashable and beyond.

From changing song volume to controlling your home’s lighting, the promises came thick-and-fast—but when crunch time came and the product was shipped, it was found to be sorely lacking.

A four-minute video by Snazzy Labs goes into forensic detail over the product’s failure, from the bulky size to the requirement that users actively have the app open to use it—negating any time-saving benefits the smartring might confer.

Oh, and let’s not forget one more detail: It doesn’t even work.