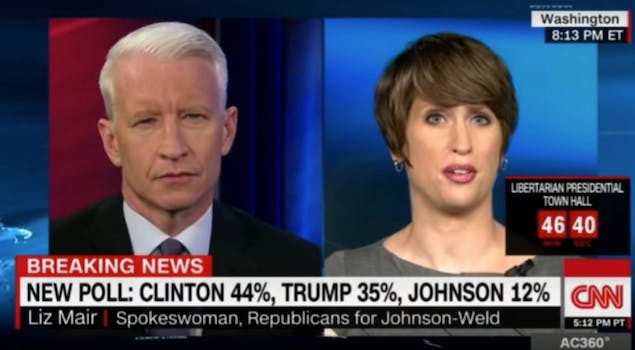 Liz Mair, a GOP communications expert and supporter of Libertarian candidate Gary Johnson, told everyone her true feelings about Donald Trump. And it wasn’t pretty.

In an interview with CNN’s Anderson Cooper on Thursday, Mair said she “lost hope” in the GOP’s ability to rein Trump in, saying that efforts to control the Republican presidential candidate have failed because he’s “a loudmouthed dick.”

Mair added that she expects that everyone will “continue to see the Republican nominee basically acting as if he’s on a suicide mission and aiming to take the whole rest of the party down with him.”

This isn’t the first time someone took to CNN to tell everyone how they really felt about Trump. Three days ago, Fareed Zakaria called Trump a “bullshit artist.”

“There’s a pattern here,” Zakaria says. “Every time it is demonstrated that Donald Trump is plainly ignorant about some basic public policy issue, some well-known fact, he comes back with a certain bravado, and tries to explain it away with a tweet or a statement.”

That is, he said, “the mode of a bullshit artist.”