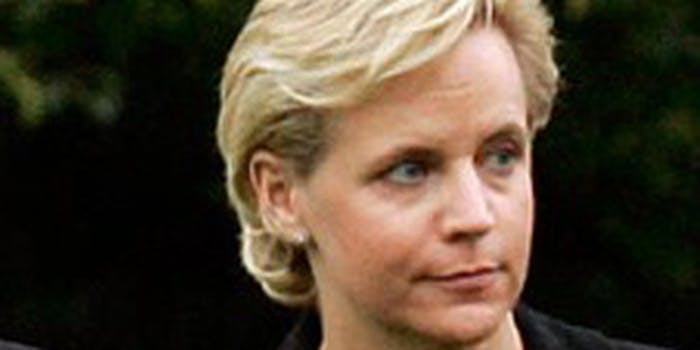 Your family probably has its own way of resolving internal arguments, but when you’re the Cheneys, and one of you is seeking public office, those spats have a way of becoming headline news. This time, Mary Cheney has taken to Facebook to guarantee just that—slamming the position on same-sex marriage held by her sister Liz, currently in the running for one of Wyoming’s senate seats.

“For the record, I love my sister, but she is dead wrong on the issue of marriage,” Mary Cheney wrote in a Facebook post Friday evening, according to The New York Times. ““Freedom means freedom for everyone. That means that all families—regardless of how they look or how they are made—all families are entitled to the same rights, privileges and protections as every other.”

Liz Cheney had earlier that day punted on the issue of same-sex marriage with a weak states’ rights argument: “I am not pro-gay marriage,” she said in a statement. “I believe the issue of marriage must be decided by the states, and by the people in the states, not by judges and not even by legislators, but by the people themselves.”

These comments apparently came as a reaction to a push poll which insinuated that Cheney was “aggressively” promoting abortion and gay marriage. She is campaigning against incumbent Republican Sen. Mike Enzi, who opposes same-sex marriage outright. “The people of Wyoming deserve an honest campaign,” Cheney also said. “They should not be subject to the kind of dirty tricks this push poll represents.”

Although the Cheney’s father, former Vice President Dick Cheney, was on a ticket that famously won reelection based in part on anti-same-sex marriage sentiment, he himself supports the practice. Mary Cheney, herself a lesbian, married her longtime partner, Heather Poe, in Washington, D.C. last June. The couple already had two children.

Earlier this year, Mary Cheney was also a signatory to an amicus curiae brief for Hollingsworth v. Perry, in which the U.S. Supreme Court struck down California’s Proposition 8, the ballot initiative which sought to forbid recognition of same-sex marriage. In many ways, she’s been a constant reminder to conservatives about the votes they stand to lose if they continue to cling to increasingly unpopular social doctrine.

If nothing else, we bet she makes the Cheneys’ Thanksgiving dinner an interesting affair.