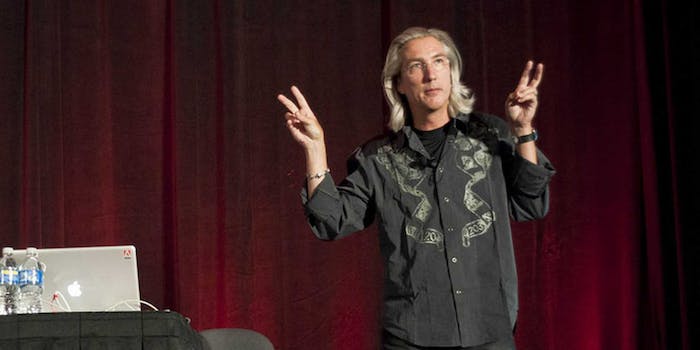 “That's literally all it does.”

There’s a lot of improper usage on the Internet, and some people literally can’t even with it. Fortunately, now they don’t have to. This new Chrome extension from developer Mike Walker replaces every instance of “literally” with “figuratively.”

“That’s literally all it does,” reads the Chrome Web Store description.

This might be good for a few laughs, if you’re the kind of pedant you finds this kind of thing funny. But replacing every “incorrect” use of a word with its (ostensible) opposite is not really the best way to help folks to use language more precisely. Surely there are, after all, instances of the word “literally” on the Internet where its use is not, indeed, figurative.

Most of the time, when people use “literally,” they really mean “actually.” “I literally filed this story in 20 minutes,” for instance.

I have no qualms with those who aspire to conform their sentences to proper grammar and syntax, but to unequivocally condemn the use—or overuse—of a particular word seems horribly misguided. Critics of “literally” (ahem) mistake hyperbole for improper usage.

There is not, in fact, anything grammatically wrong with claiming that someone is “literally Hitler.” If one were to claim that the same person was figuratively Hitler, would that really be any better? And for that matter, who is Mike Walker—or anyone—to declare “figuratively” the necessary antonym of “literally”? It’s a reasonable inference but one that does not hold up under scrutiny.

Any comparison of someone or something to Hitler is necessarily hyperbolic. As such, one could argue that to say someone is “literally Hitler” is more accurate because it is, indeed, more explicitly hyperbolic.

Language is an imprecise thing, a broken system for conveying meaning and intent, full of potholes and traps and cracks that readers, speakers, and writers are never not navigating. We need not be constantly aware of this process, because we come to be aware of it only when the exchange breaks down, when we are misunderstood. Meaning is something to be midwifed, not blacksmithed. Figuratively.