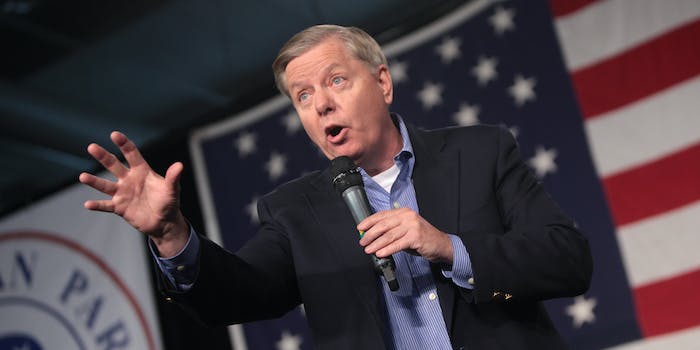 It's a good bet Trump was watching.

Specifically, Graham tried to encourage Trump, who reportedly watches quite a bit of cable news and has shown a strong affinity for Fox in particular, not to fire Special Counsel Robert Mueller.

“Mr. President, if you’re watching, I think you’re going to be fine unless you screw this up,” Graham told Fox News host Martha MacCallum. “Let the process play out. I don’t believe you colluded with the Russians, but Mueller will soon tell us. The Cohen situation, I am convinced, has got nothing to do with Russia.”

“If Mueller was trying to squeeze Cohen, Mueller would have done it. This is something unconnected to Russia. I’m 100 percent convinced of that.”

Graham is one of several senators who have crafted a bipartisan bill that would protect special counsels if they are fired by creating a 10-day period where they can appeal a decision before federal judges.

The notion of Trump firing Mueller has gained some traction in recent days after the president said “many people” have told him to do so in the wake of the FBI raiding his personal attorney, Michael Cohen.

This isn’t the first time Trump has considered firing Mueller, according to reports, but the president tried to pour cold water on the idea on Thursday morning.

“If I wanted to fire Robert Mueller in December, as reported by the Failing New York Times, I would have fired him. Just more Fake News from a biased newspaper!” Trump wrote on Twitter.

If I wanted to fire Robert Mueller in December, as reported by the Failing New York Times, I would have fired him. Just more Fake News from a biased newspaper!

However, earlier this week Trump said Mueller’s team had “the biggest conflicts of interest I have ever seen.”