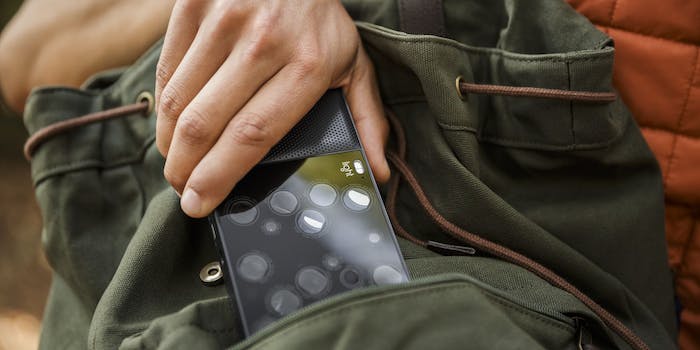 Light wants to be a heavyweight in photography.

Smartphone cameras have been getting better at a rapid rate, but no product represents the leap in capability for mobile photography quite like Light. 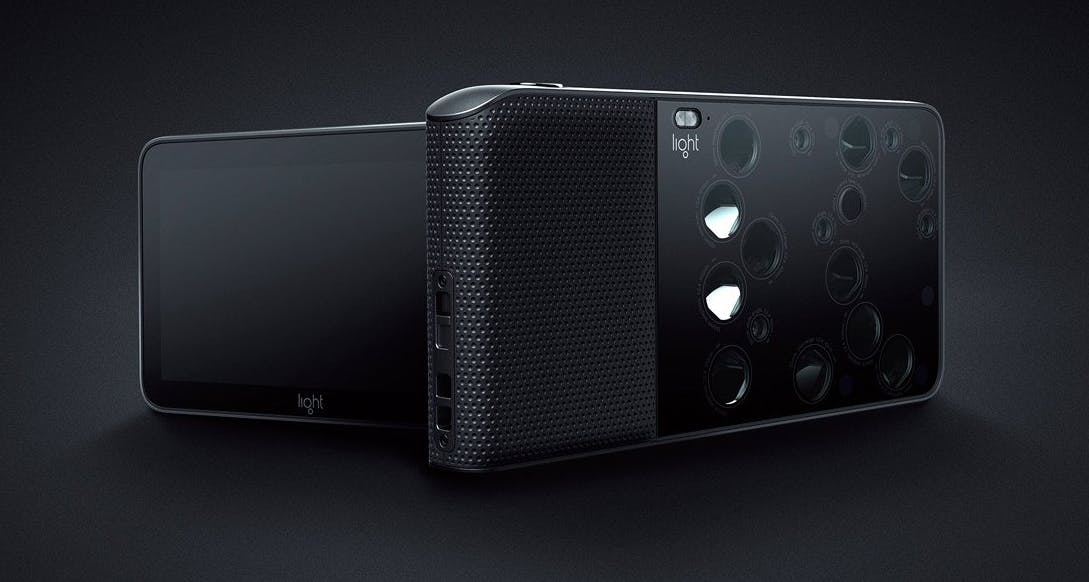 At CES 2016, the company demonstrated its absurd DSLR-quality camera for the first time since announcing the concept back in April of 2015. The camera can be used in conjunction with a smartphone but serves as a standalone device. The working prototype of the L16 is a bit heavier and bulkier than what the finished product is promised to be, and the interface isn’t in place yet, but the camera works as advertised. The results are impressive.

The prototype, which is still about the size of a smartphone with a little more heft to it, was connected to a PC instead of processing the image on its own. However, the main unit was functionally complete, and the camera modules and mirrors were in place, representing what one can expect out of the finished product.

When using Light to take your photo, it doesn’t appear any different than your standard camera app. A simple reference view shows what the user will see when using the camera. Beyond the streaming image from the camera, there are four other cameras that have the same focal length but capture the image from a different angle. The engineer behind the camera explained those lenses allow the device to perform the depth of field computation. 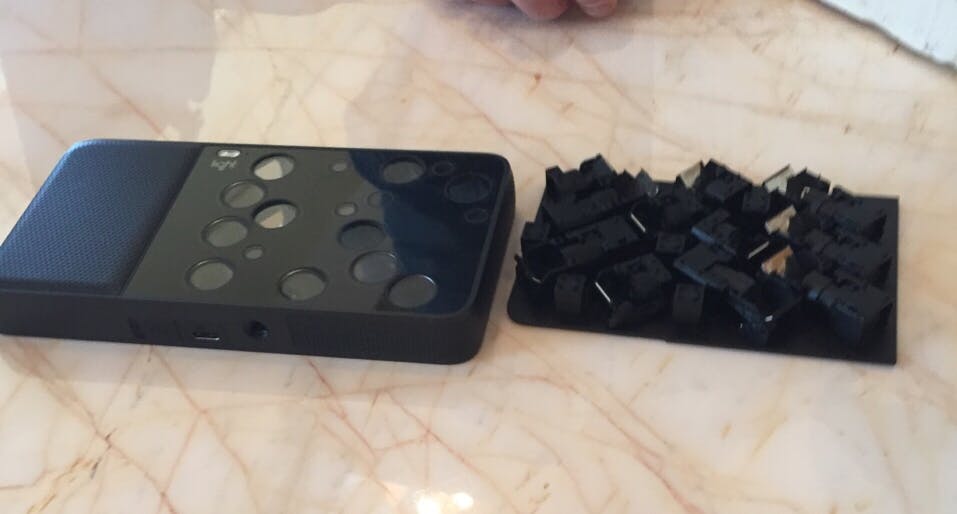 In addition to the five primary lenses are five accompanying high-resolution cameras that point at different parts of the scene and capture different quadrants.

“The idea is tiling it and stitching those together, which we’re only able to do because we took the background pictures,” co-founder and CEO Dave Grannan explained to the Daily Dot.

To take a photo, Light fires up to ten of its 16 cameras at once. Each image exists on its own, angled slightly differently and capturing a different part of the scene. But that’s the sausage-making process that takes place behind the scenes. “In our prototype phase, it’s this very complex rig,” Grannan said. So complex in fact that the company’s scientist keeps a fire extinguisher on hand if it starts to run too hot. 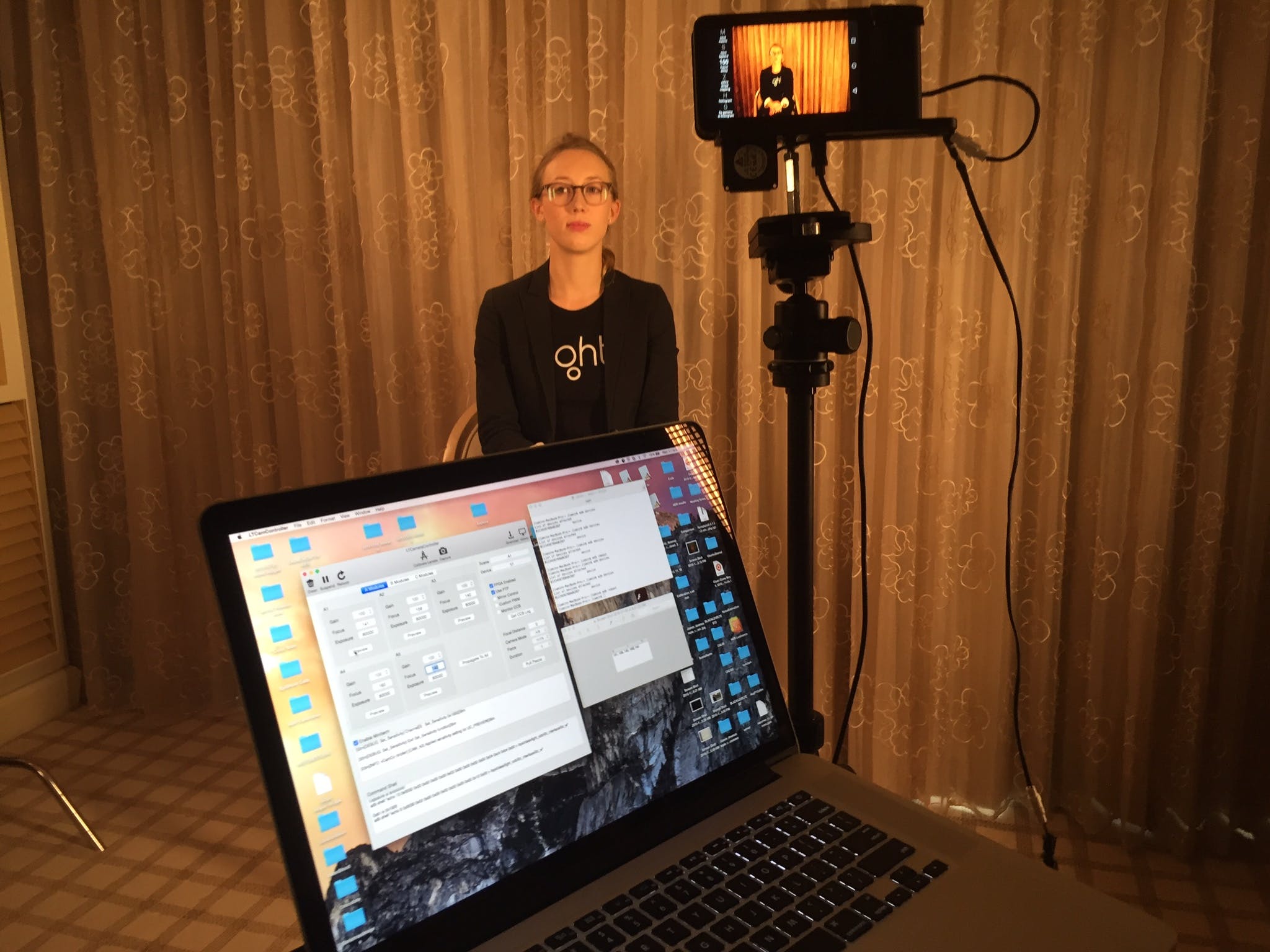 When Light makes it into the hands of its users they (hopefully) won’t need to count that as an accessory. They also won’t see the stack of photos on their own; what the user winds up with is the algorithmically-combined version that exists as a single image and can be edited after the fact. Grannan said the final product would be “just like using your Android phone.” Light is using the open source operating system to put together its interface, and the device will be compatible with both Android and iOS via an app that will allow users to control the device remotely.

“You take these ten cellphone-quality images…and computationally, when you put them together you get this super high-quality image,” Grannan said. With Light’s software, users will be able to take that single image and adjust the focus and depth of field to shift the composition of the photo, essentially making it the Lytro camera on steroids. The image will output in .JPG and .RAW so people will be able to use the final product of their editing the same as they would a quick snap from their phone’s standard camera.

While the photo taker will have free reign to do with the photo what they want, the images can live as editable products for others as well. Light hasn’t revealed exactly how much it wants to allow others to interact with the photos yet, but imagine opening a friends’ Facebook photos and being able to play around with the image. The L16 is capable of accommodating that type of interaction.

The product is still six to eight months from shipping, but there has been no shortage of excitement for the device. Light opened pre-orders in October 2015, allowing users to reserve one of their own for between $1,299 and $1,499, which is a moderate savings off the eventual list price of $1,699. That seems like a steep demand, but Grannan said the company has to cut off pre-orders in mid-January because they’ve maxed out their production capacity.

Because Light is a privately owned company and not gathering its backing from crowdfunding platforms, it hasn’t released any hard numbers as to how much cash it has raised. Grannan made it clear that even if you don’t put a number on it, it’s a significant amount of money. “If you look at IndieGoGo and Kickstarter and you look at the highest selling items out there, we would be in the top five of all tech items ever launched,” Grannan said. “We actually found a real deep vein of photography enthusiasts who get this pain point we’re going after.”

Where Light thinks it can best fit into the arsenal of photographers is as a professional-grade item with the portability of a smartphone. It’s capable of getting shots that the lens in your handset just can’t capture and it doesn’t require a bag full of swappable lenses like a DSLR often does.

“If you look at our architecture, we have these fixed length prime lenses, and then we have a system-level zoom solution between them. Buying the L16 is the equivalent of buying a full-frame DSLR and four lenses…we think, conservatively, even if we’re selling for $1,699, that would be about $6,000 worth of gear and would take a backpack to carry,” Grannan explained.

Starting in the summer, the photography fanatics who put down the cash up front for Light will start to get their hands on the camera. If it works as good as it appeared to in the demonstration, you’ll know it because your social media feed is going to have a lot of pretty pictures.