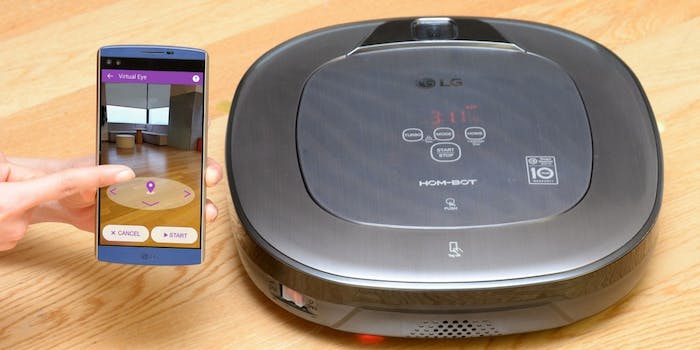 LG’s new robot will patrol your house for intruders, and vacuum when it’s bored

If you’re worried about the eventual robot uprising, you probably aren’t about to let a robot vacuum into your home—especially not LG’s latest, which will constantly monitor your house and take pictures from inside it.

If ever there were a spy for Team A.I., it would be the LG Hom-Bot Turbo+. Part of the company’s upgraded CordZero collection that will be on display at CES 2016, the square-shaped floor sucker has been equipped with a whole heap of new tech that will help keep your home spotless.

The latest model of the Hom-Bot utilizes new augmented reality technology called HomeJoy that gives owners precision control over the device. Users will be able to direct the bot to a spot that needs cleaning by taking a picture with their smartphone. The Hom-Bot will recognize the spot and make its way to the dust in need of busting.

When not being sent to a specific spot, an intelligence software system called Robonavi guides the dual-CPU powered robot around the house, making sure it doesn’t get stuck in corners or fall down the stairs like the world’s worst slinky.

LG has also equipped the smart vacuum with its Triple Eye camera sensors. Located on the front of the machine, the camera records from all angles—including the ceiling—to track what has already been cleaned. Of course, the Hom-Bot can’t clean the ceiling, but it will let you know if it’s dirty. It’s only fair that it gets to point things out to you just like you can to it.

The camera also enables the Hom-Bot to offer a new set of security features: Home-View and Home-Guard. As the name suggests, Home-View gives users the ability to tap into the Hom-Bot camera and remotely view and control the vacuum from anywhere. If you’re an obsessive-compulsive cleaner, this feature is going to be dangerous.

As for Home-Guard, it basically turns Hom-Bot into a robot bouncer. If it senses movement inside the house while the home owner is away, the little snitch snaps pictures and sends them off to the paired smartphone as a means of alerting them.

LG didn’t provide any information in regards to pricing or release date, so you’ll have to wait until CES to learn more. In the meantime, you can buy one of the current models of the Hom-Bot and strap a Nest camera to it.