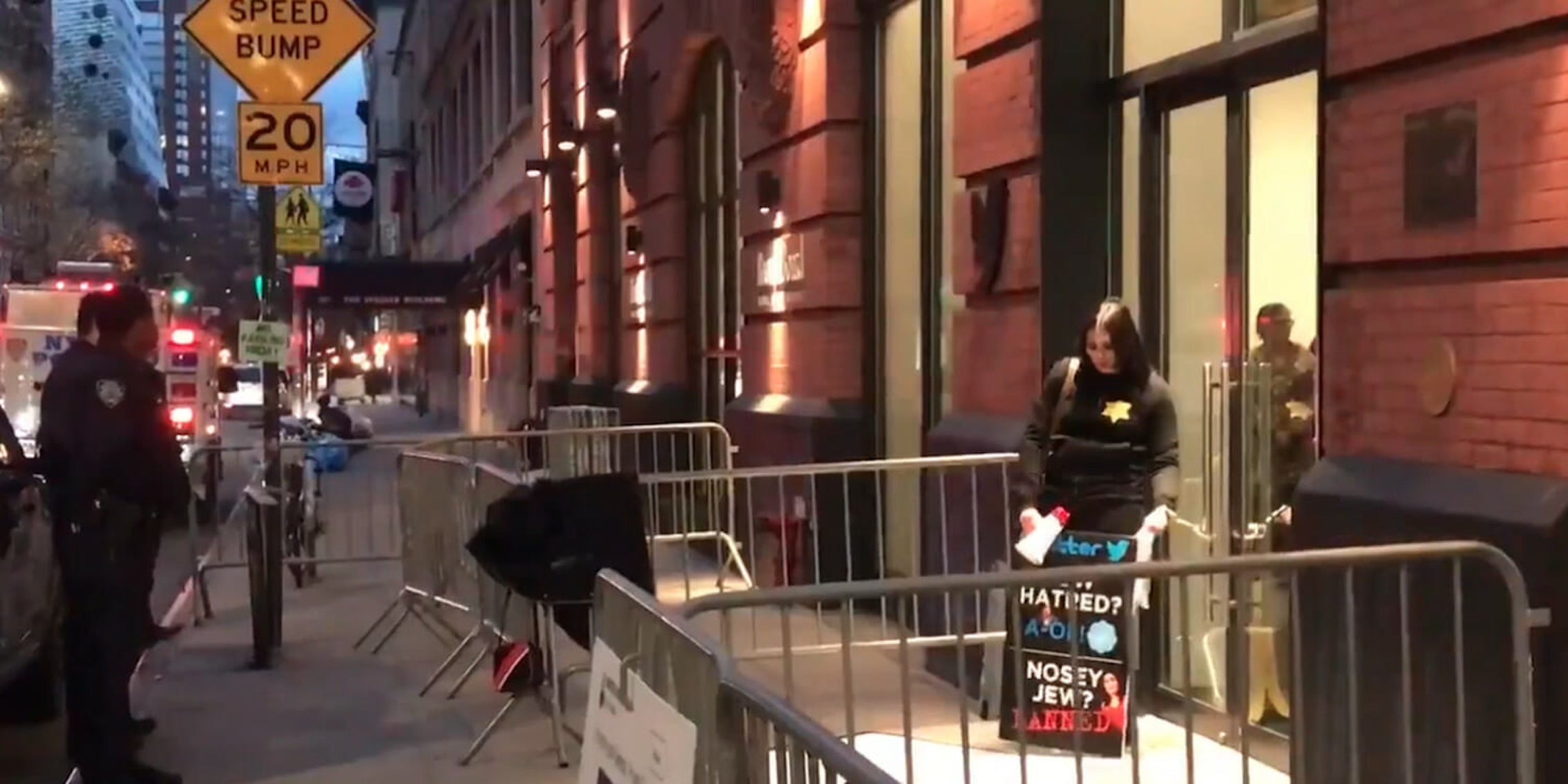 Right-wing activist Laura Loomer chained herself to the front door of Twitter’s offices in New York City on Thursday. She says she protesting her own banning from the platform as well as the “silencing of conservatives like myself.”

Wearing a yellow star, the badge which European Jews were forced to wear during the Holocaust by the Nazis, Loomer ranted via a loudspeaker that Twitter was “anti-Semitic” and pro-Sharia law. She also described her suspension from the platform as “a human rights issue.”

The incident was livestreamed on Periscope and shared widely on social media—trending worldwide on Twitter.

Here's video of Laura Loomer handcuffing herself to Twitter's NYC headquarters to protest being banned / losing her verified checkmark. How will it end?! https://t.co/QTtVDvEgwq

Law enforcement arrived soon after the protest began and asked Loomer to uncuff herself from the doorway, citing it as a fire hazard, which she refused to do. Officers removed the loudspeaker from Loomer but she continued to shout about Silicon Valley and censorship.

Laura is claiming she threw away the key to her handcuffs, will stay all night or "as long as it takes." pic.twitter.com/AijADWMxPZ

Loomer was permanently suspended last Wednesday. She was found to be in violation of Twitter’s rules on “hateful conduct” over a tweet about Minnesota’s Democratic Representative-elect Ilhan Omar, criticizing the lawmaker’s Muslim faith.

“Isn’t it ironic how the twitter moment used to celebrate ‘women, LGBTQ, and minorities’ is a picture of Ilhan Omar?” the tweet said. “Ilhan is pro Sharia Ilhan is pro- FGB Under Sharia, homosexuals are oppressed & killed. Women are abused & forced to wear the hibah. Ilhan is anti Jewish.”

Conservative pundits on Twitter, however, haven’t stood behind the handcuffing stunt.

Ratio me all you want, but Laura Loomer acting like an idiot and handcuffing herself to @Twitter is crazy enough, forget about wearing a star that my grandparents who got burned alive were.

Comparing being kicked off a private company’s platform to millions dying is despicable. pic.twitter.com/uCjPVH8v3G

Three things can be true at once:
1. Loomer shouldn't have been banned from Twitter.
2. Twitter is obviously looking to purge people with unpalatable political beliefs.
3. Wearing a yellow star to protest a Twitter ban is RIDICULOUS.

The rest of the internet finds it all quite amusing and very 2018.

how the internet is reacting to laura loomer right now pic.twitter.com/gEukTWNyO4

Police said Twitter does not want to press charges, and Loomer is free to stay as long as she wants. As of publishing, the protest continues.