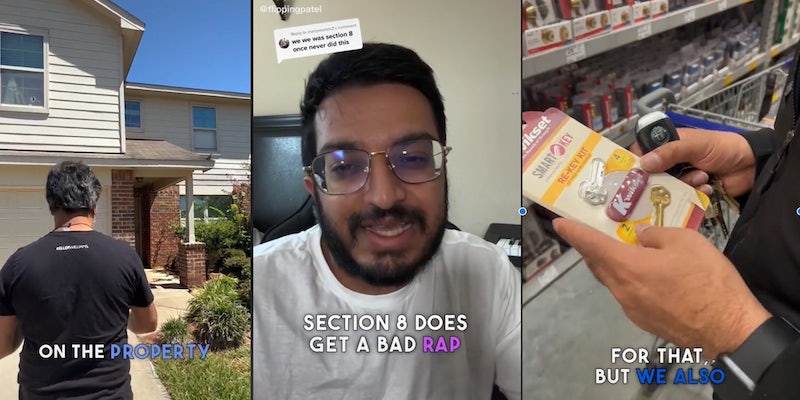 ‘Get a real job’: Landlord roasted for filming Section 8 eviction

A TikTok landlord is getting roasted on the platform for making a video series showing him evicting a Section 8 tenant.

The TikToker, Mital Patel (@flippingpatel), made a video last month showing the final eviction of a tenant who was a part of the Section 8 Housing Choice Voucher Program. In the video, which has over 6.6 million views and 640,000 likes, Patel can be seen driving to the property and commenting on the disarray that he finds.

In it, he claims he got multiple violations from the neighborhood’s homeowner’s association before heading to the property to see the state it was in.

“Come with us as we go evict our Section 8 tenant,” the video gleefully kicks off.

A later video shows him changing the locks on the property and locking windows so the tenant couldn’t come back in. The landlord towed a car left in the garage, as well

In a stitch, TikToker @cricken_ roasted the landlord.

“What’s up guys, welcome back to a new video. Today we’re making somebody homeless,” he said, mimicking the start of Patel’s own video. He then points his criticism directly at Patel. “Get a real fucking job.”

Patel has defended himself in recent videos. He said he tried to reason with the tenant and negotiate with them but was not successful. He also said the tenant beat their children and left the property in complete disrepair after violating the lease several times.

Nevertheless, users on TikTok were quick to roast Patel and his video.

“The classism in the way he said ‘section 8’ like a slur,” one commenter said.

“People will defend them but most landlords literally start from their parents being landlords and just giving them property,” another wrote.

In a series of follow-ups, Patel said that they supported the Section 8 program, which helps provide assistance to low-income families who want to rent in the private market. Patel was asked if he would still rent to Section 8 families, as users told him that stopping because of one bad experience would keep much-needed housing off the market. Patel said they would consider continuing. It is unclear where Patel is located, but in some places, refusing to rent to Section 8 tenants is illegal.

Patel did not immediately respond to a request for comment.