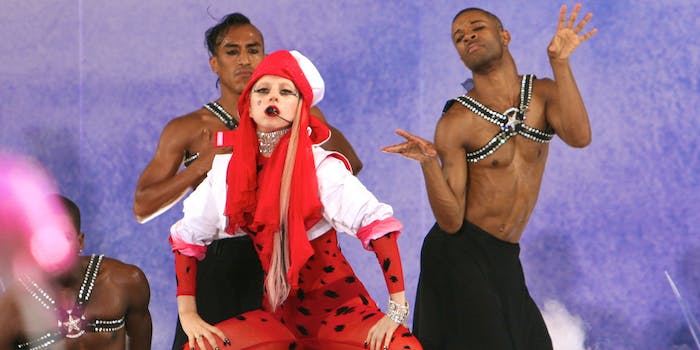 Lady Gaga wants to help you build your own social network

A technology company backed by Lady Gaga wants to help you create custom-built social networks—and get paid for it.

Big fan of De La Soul? Want to meet other amateur dermatologists? Unhealthy fascination with chipotle? Whereas previously you’d be forced to find solidarity in Facebook groups, or—worse yet Twitter—a technology company backed by Lady Gaga wants to help you create custom-built social networks—and get paid for it.

Backplane is a platform that powers various specialized social-networking sites, from Minecraft community Team Crafted to Guns N’ Rose Tribute site Paradise City. It was first established in 2011, initially powering Lady Gaga’s fan network LittleMonsters.com. (The reigning Queen of Pop is a major investor in the company.) Little Monsters has since accrued around 1 million members. In early 2013, Backplane expanded its reach and brought new brands—including Condé Nast—into its roster.

The company now intends to open the floodgates and allow anyone to build their own social network focused around the issues they care about. There’s a strong emerging market for specialized networks—TechCrunch reports that more than half a billion people use Facebook groups—but administrative controls and customization options on Facebook are limited, and it’s impossible to monetize groups.

Starting from the third quarter of this year, Backplane aims to change that. Using its software, you’ll be able to set up networks dedicated to your favorite sports team, anime, band—or whatever it is you’re passionate about. And it’ll allow adverts and other revenues streams.

“They’ll be able to charge dues, sell merchandise and crowdfund projects,” Backplane COO Scott Harrison told TechCrunch, “and if their community grows large enough, Backplane even wants to help them sell ad space in their networks and split the revenue.”

Facebook benefits from the network effect: Its ubiquity drives new customers to it and continually reinforces its dominance on the online sphere. In recent years, it (and other social media platforms) has leveraged this position to encourage the proliferation of social login tools—and studies show that users love it. Every new website account is a new set of passwords and login details to remember; allowing users to log-in elsewhere with their social media accounts does away with all that hassle. It also further centralizes the Internet around Facebook and other social networks in the process, consolidating their position as Internet “hubs.”

Social login provider Janrain claims that just by introducing the technology, websites can boost registration rates by up to 50 percent—illustrating just how averse Web users are to making unnecessary accounts and using unnecessary services. While Backplane does allow login via Facebook or Twitter accounts, the company nonetheless faces the challenge of convincing potential customers that they should break away from the sites to which they’ve become accustomed, and that using specialized social networks is necessary.

Persuading the admins and organizers to abandon Facebook groups and Twitter fan accounts will be easy—there’s the promise of cold hard cash, after all—but attracting users may be a very different story.