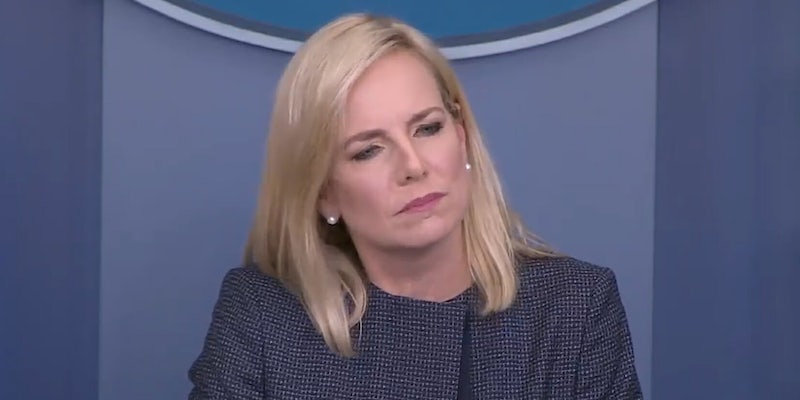 This time, Trump announced Department of Secretary of Homeland Security Kirstjen Nielsen’s departure Sunday evening after a spat over immigration.

Secretary of Homeland Security Kirstjen Nielsen will be leaving her position, and I would like to thank her for her service….

According to Axios, his tweet came while Nielsen was trying to put out her own resignation statement after a meeting between the two had gone off the rails.

She wasn’t intent on quitting but was prepared to, sources tell us. The meeting went poorly, and Trump didn’t even let her announce her “resignation.” While she was racing to put out the letter (not that different from one she wrote after midterms), Trump tweeted that she “will be leaving her position.”

But if you agreed to work for this administration, that’s just one of the occupational hazards. Since Trump’s taken office, he’s announced the departure of Secretary of State Rex Tilllerson, Secretary of Veterans Affairs David Shulkin, White House Counsel Don McGahn, and National Security Adviser H.R. McMaster on Twitter, among others.

Trump’s administration has continued to be one of the most tumultuous in American history, with unprecedented levels of turnover.