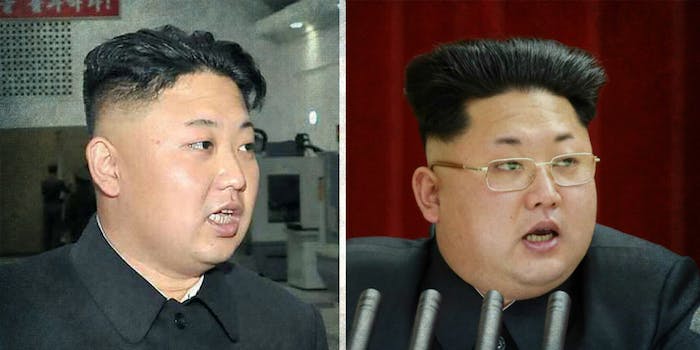 Kim Jong-un, child god-king of North Korea, has a new haircut intended to connect him to his grandfather, Kim Il-sung.

It’s quite the barber’s trick, some kind of upside-down trapezoid that proudly defies the laws of physics.

That’s not the only new cosmetic upkeep to grace the tyrant’s head—he now sports half-shaved eyebrows. Who knows why? The Guardian calls it “a fine example of fashion’s current love of gender-neutral style.”

Ki Lee, founder and creative director of a London salon called Hurwundekei, told the Guardian that the new ‘do is possible with the tag-teaming efforts of perm and wax. “It’s not too easy to do on Asian hair, but we get a lot of people coming into the salon requesting this sort of volume,” Lee said.

Lee added that the hairstyle will require a new perm every few months, if it’s to be maintained. Of course, in the mean time, the Internet is having a heyday:

Who wore it better? RT @Justin_Ling In other news, Kim Jong Un has a new haircut https://t.co/ZdVEXP3sD1 pic.twitter.com/uxLBkIzsgP

Via @reddit: How would Obama look in a Kim Jong-un haircut https://t.co/l8Jp6bwG0d pic.twitter.com/5HhyRsxU0M